A brief overview of Telegraphs, Telex and Data services in the Australian Post Office/Telecom network​

​Information on this page was largely derived from the following sources:
This page updated Jan 2021. The information in this article is sparse and probably incomplete. If a reader can add content or correct errors, please let me know through my contact link.
Contents
​
​Morse telegraph Systems from 1854
In 1854 the first Australian telegraph line was installed in Melbourne and by 1877 there was a network spanning the Australian colonies. International connection was first made via Darwin through the Dutch East Indies (Indonesia) in 1872 (more information here).

​The received messages were transcribed to paper, sealed and delivered to the recipient by messenger as a telegram. From my memory, appointment as Junior Postal Officer - JPO (Telegram Boy) was a common start into a long career in the PMG Department for many 14 y/o boys from colonial times through to the first 60+ years of the 20th c.
Teleprinters
Introduction of the teletype/Teleprinter 1900s
Patented in 1899 by NZ born Donald Murray, the Murray Teletypewriter system was adopted by the PMG by the 1920s to speed up telegraphy services.

Download File
​TRESS 1959
For telegraphs, the Teleprinter Reperforator Switching System involved storing all messages on perforated tape at the Chief Telegraph Office in capital cities and forwarding to nominated post offices or printergram terminals when switching equipment, links and receiving equipment were available for transmission. 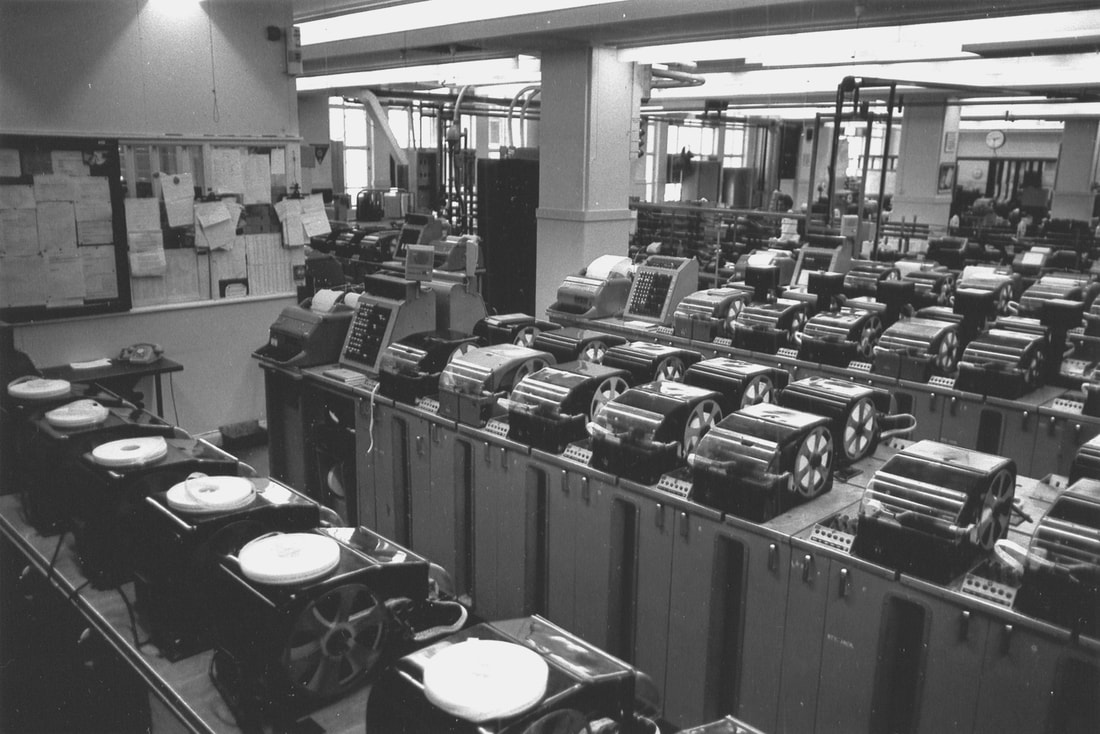 TRESS Perth (probably 1960s). Source: Old PMG photographs
Telex 1954
The Telex network was a customer-to-customer switched network of teleprinters operating in a similar way to a telephone exchange network but using special teleprinters ("telex machines") and telegraph circuits for two-way text-based messages. Telex shared the cable network with telephony but was an independent switching network. Every subscriber had a unique five-digit number preceded by a two-letter country code. Australia’s code was ‘AA’.

Australian Telex was introduced on a manually switched basis in 1954 and converted to automatic exchanges in 1966 using Ericsson ARB crossbar equipment.  In the 1980s the states’ Telex exchanges were closed and customers routed to Digital AXB exchanges in Sydney and Melbourne via multiplexing equipment (see this writer's anecdotes at the bottom of this page).

Not Australian, but a simple overview of the Telex system can be seen on this Youtube video at:
https://www.youtube.com/watch?v=byMwNPj47X8

​As far as can be determined, Telstra moved its remaining Telex customers to a simulated system operating over telephony,  “inTelex”, in about 1999. Telstra sold the InTelex product to a company named Matrix Omni Solutions Pty Ltd in July 2006 who operated it from the OTC building in Paddington NSW until 31/12/2011. (Thanks to former Telstra employee Stephen Heming for this information). Telstra removed the Intelex service completely from its product list in 2012.

​Telecom Australia publicity video ca early 1980s? Sagem 2000 telex machine. We were starting to improve in our treatment of women! ​www.youtube.com/watch?v=5B-t6YGnNkQ
"Machine telegraph systems used in Australia" A very good summary by the abovementioned Ron McMullen can be viewed at:
https://australiantelegraph.files.wordpress.com/2021/01/machine-telegraph-systems-used-in-australia.pdf
Picturegram and facsimile services
Picturegram service Sydney – Melbourne 1929
The picturegram service, operating over the telegraph network, was introduced between Sydney and Melbourne in 1929, It was upgraded over the decades and was eventually Australia-wide. It persisted well into the 1960s,
​Facsimile services 1966
Capable of transmitting good quality newspaper images etc.
​DATEL 1969
The Datel (data over telephone) service was introduced in 1969, with options of using the switched telephone network for lower speeds (e.g. 1200b/s), or leased lines for higher speeds. Digital to analogue modems supplied by the PMG were an essential part of the service.
​CUDN 1970
Common user data network was a store and forward message switching system, designed to transfer data from one location to one, or more, specified distant locations, using magnetic disc packs for storage and with computers performing the routing functions. CUDN was an ambitious project that appeared not to meet expectations as it was withdrawn from public service at any early date.
​DDN
By 1980, a rapid move towards digital switching and transmission saw creation of a number of specialised networks such as a digital data network, which overlaid the analogue public switched telephone network.
AUSTPAC
Source: https://en.wikipedia.org/wiki/AUSTPAC
AUSTPAC was a public X.25 network implemented by Telecom Australia in 1982, It was Australia's first public packet-switched data network, supporting applications such as online betting, financial applications (e.g. the Australian Taxation Office) and remote terminal access to academic institutions. Austpac could be accessed by dial-up modem to to a PAD or by linking an X.25 node to the network permanently.

On July 31, 2006, Telstra announced the timetable for the shutdown of Austpac and it was decommissioned around mid 2008.
VIATEL
Source 1: https://en.wikipedia.org/wiki/Videotex#Australia
Australia's national public Videotex service, Viatel, was launched by Telecom Australia on 28 February 1985. It was based on the British Prestel service. The service was later renamed Discovery 40.

Source 2: https://archive.org/details/ViatelDirectoryAndMagazineVolume41986TelecomAustralia
"Until now, your personal computer was generally limited to your information input. Or to the software available. Now Telecom Viatel opens up a whole new world for PC owners. Utilizing the existing telephone network, Viatel distributes a wide range of information and services via a central computer. Direct to your home or office. So you can bank from home. Send messages to other Viatel users. Access Telecom's national Telex network. Get updates on news, sport and weather. Follow economic indicators. Make bookings. Check airline schedules. Order Goods. Play games. And much more. Even download new computer programs onto disk or cassette for your own use. Your personal computer can be adapted to emulate a Viatel terminal. All you need are a Telecom approved 1200/75 baud modem and the appropriate software. These are now readily available for most PC's."

To quote one author (here) "However, the lack of good content meant that users had little incentive to use the service; the lack of users in turn removed the incentive for the development of content; so that the service never attained critical mass and was ultimately abandoned."
​ISDN from late 1980s
The Integrated Services Digital Network is/was a circuit-switched telephone network system that transmits both data and voice over a digital line. It employs a set of communication standards to transmit data, voice, and signalling enabling end to end digital connection for customers.

Based on a 64kb/s data channel, there are two different types; A Basic Rate Interface (BRI), comprising two 64kb/s channels. These can be multipled up to 256 kb/s. The second is a Primary Rate Interface (PRI). This line had 30 channels and has a total speed of 2 Mb/s.

Telstra is no longer offering this product and with the emergence of NBN it is scheduled to be closed in 2022.
This writer’s anecdotes
The Australian Telegraphs, Data and Telex networks are fading from both memory and history. I was involved in training field staff on FATME Mux45 and Ericsson MD45 in the mid 1980s. They were multiplex systems that combined 45 customer telex services onto a 2400 b/s data link into Sydney/Melbourne's new AXB exchanges so they could shut down obsolete, regional ARB (crossbar) telex exchanges.

I remember visiting the WA Telegraphs & Data section (when it was in East Perth) at around the same time. A technician  had been given the job of un-boxing brand new (I think Sagem TX20?) telex machines and applying a well-aimed sledgehammer blow into the mechanism. Apparently they were excess to requirements, couldn't be sold off and Telecom Australia wasn't going to risk anyone picking up a whole machine from the rubbish dump. Seemed perfectly normal at the time......