Interesting acquisitions
Added 16 May 2021.
Novelty phone
A cheap and cheerful Chinese novelty phone I picked up recently from a local Op Shop. There were several, brand new in their boxes. No evidence of a compliance label anywhere! So definitely only a curio.
​Added 12 Aug 2020
Telecom Australia PAMTS Carphone
Mid 1980s carphone used in WA. A little later than the original 1981 model. In this model, I believe the transceiver (LHS) was installed under a seat. The early ones were in the boot. Gifted by a local gentleman, Mr K Perry. It will form part of a display kit when I do public presentations again. 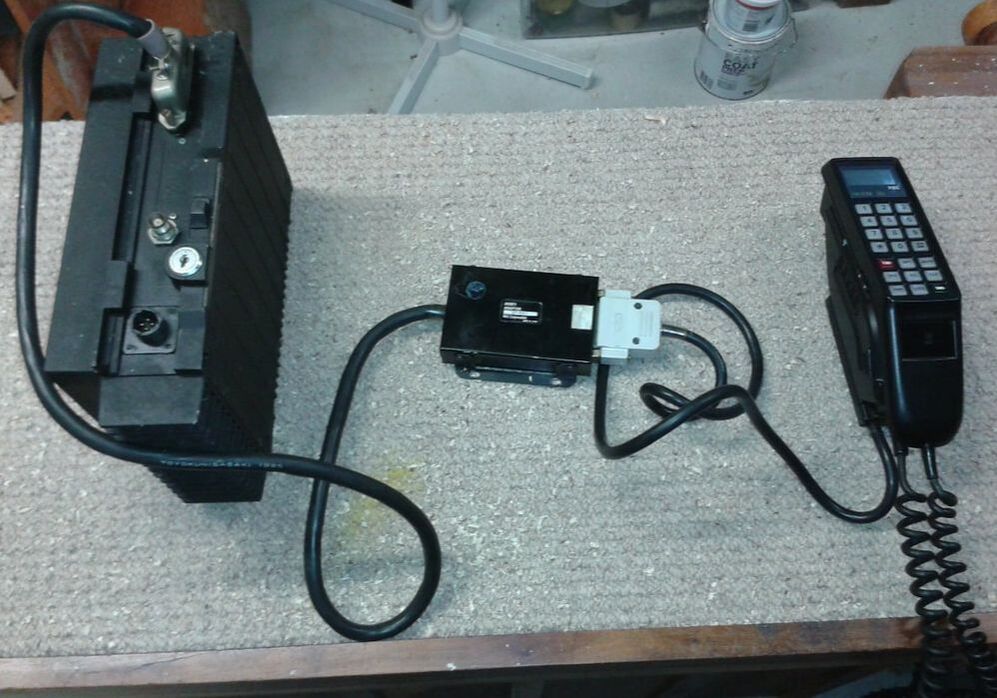 Added 29 July 2020
Western Electric USA 302 telephones
I purchased these phones in a job lot recently from a local gentleman who was attempting to  downsize. They were complete but scruffy, so I did a mild restoration on both of them. They are now clean and tidy and in good working order. Both are fitted with F1 Bakelite handsets. The CB model on the left is dated 1942 and has a metal case - made from some kind of zinc alloy. The auto model on the right is from 1948 and the case is plastic. I believe the material is called "Tenite", a form of cellulose acetate plastic. Made from plant fibre, it is a refinement on the the earlier, and flammable, celluloid (based on cellulose nitrite). According to a couple of on-line sources, the transition from metal to plastic cases was accelerated by the USA entering WW2 in December 1941 to free up metal required for the war effort. 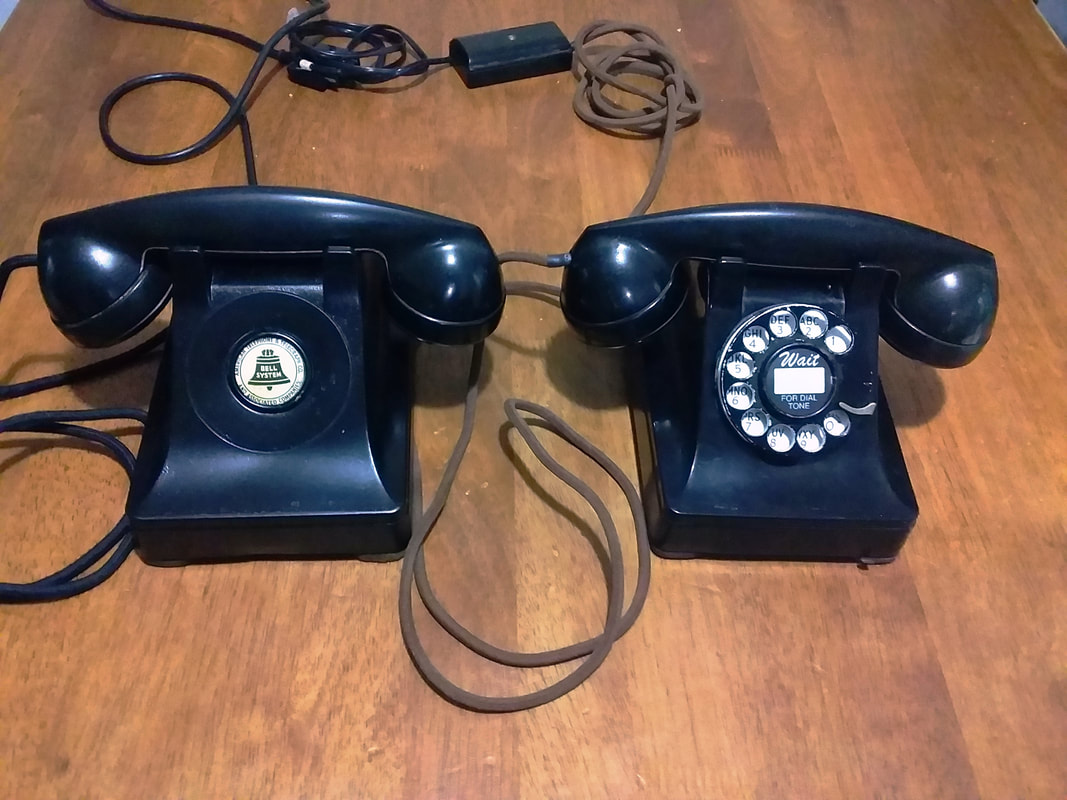 Added 22 June 2020
AWA 162 auto table and AWA 801 telephones.
Two telephones showing the development from 1930s Bakelite to 1960s ABS plastic. I recently obtained these in decrepit condition from a local lady. I replaced a damaged cradle and plunger on the 162 (L) and stripped and thoroughly cleaned the case and cleaned and lubricated the dial. It is now both working and a nice display piece. Similarly with the 801(R). The 801 is an interesting item as the case and PCB are dated (19)62 and the base 63. The case is missing the handset locating "bumps" so it is from the first production run. From 1964 the retaining bumps were in place until the end of the 800 series in the late 1980s.

The camera does lie! In the photo on the right the number 7 is absent. It must be flash flare. It is definitely there.

Added 26 May 2020
KTAS D30 Danish telephone from between WW1 and WW2
I actually purchased this phone nearly a decade ago. "A trap for young players" buying based  on photos and sellers' descriptions on the internet. The images didn't look too bad and the seller talked it up but when it arrived I was very disappointed. Very rusty, flaking nickel plating, chips in the Bakelite parts and it didn't work! I dismantled it at the time,  concluded it wasn't viable, shoved it all in a box and buried it in  a corner of the shed. One major problem was the faulty Bakelite handset - open circuit connection to the receiver inside the moulded handle. Impossible to fix and difficult and expensive to replace.

Fast forward five years or so and while holidaying in UK, I visited Malcolm at "Telephone Lines"
​https://www.telephonelines.net/. In a junk box I spotted an incomplete handset body! I think Malcolm threw it in. That ended up in the shed.

Fast forward another five years and the pandemic struck. I started looking at projects in the shed and this was the result.  The metal parts have all been stripped and resprayed, the dial has been partially stripped and repaired, the handset has been rebuilt, brassware has been cleaned and lacquered, new cords and rubber feet fitted and voila! It all works. The receiver is weak but at 80-90 years old, I'll forgive that.
Update Dec. 2020: This telephone is actually a D30 modified later by Expoga as a collectable for resale. The full story appears on Arwin's site, ​http://www.matilo.eu/3-the-phones/1960-1975-plastictijdperk/expoga-d30/?lang=en
Added 7 April 2020
1930s Keysender no 5
Obtained here in WA. Very unusual item to be found outside of the UK. Invented in Britain by Donald Macadie in about 1932. It was designed for telephonists working on large, busy switchboards. This was the first known pushbutton dialler and improved operator's speed and reduced the strain of continuously turning a rotary dial. A detailed article can be viewed at Dave Dockray's site: ​http://www.telephonetalk.com.au/images/TempStuff/09Keycaller%20No5.pdf

A short Youtube video on the Keysender can be seen here 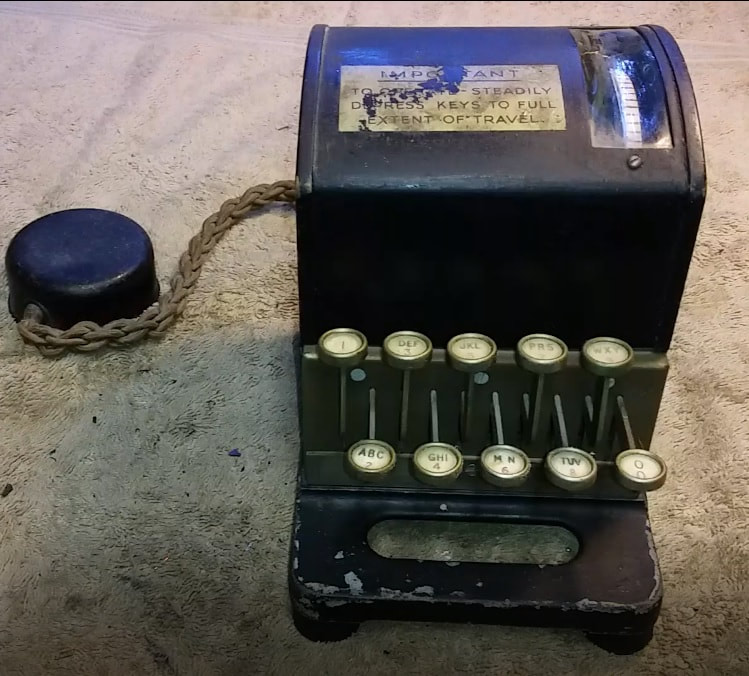 Added 7 Nov 2019
Ca. 1910 British Western Electric wall telephone
I recently obtained this in WA as two phones in decrepit condition and remade them into one unit. There is little information available on this but it appears to be from around 1910. The general opinion among my collecting colleagues is that it was manufactured in Britain by the Western Electric Coy. It shares many similarities with other BWE phones of that era. It appears to be an extension phone off a CB local network. The magneto generator was for signalling between the extension and main phones.
Added 25 Jan 2019
19th c. Buller telegraph pole from east-west telegraph system
​I was recently given this item by the family of a late friend who collected telecomm's memorabilia.  It is a "Buller" iron pole from the east west telegraph link first opened in 1877. As I understand it, the Western Australian portion of the first project used jarrah timber poles and the South Australians used iron poles. Later WA extensions used iron poles as well so I don't know if it is an original 1870s SA model or an 1890s WA one.

(March 2019) Poking around on the 'net, I picked up these two sites:
https://collections.slsa.sa.gov.au/resource/PRG+1724/6/5
https://teleramics.com/other/bullerspole.html
The first shows images of a 1950s upgrade of the South Australian portion of the line. The poles are distinctively painted in what appears as a white pole over a black base. The same as mine. The second includes a discussion of a Western Australian example of a Buller pole from around the turn of the 20th century. No evidence remains of a similar paint scheme (nor in other WA images I've seen). It is very flimsy evidence but my conclusion is that my pole is South Australian. I would be pleased if anyone could add some information. 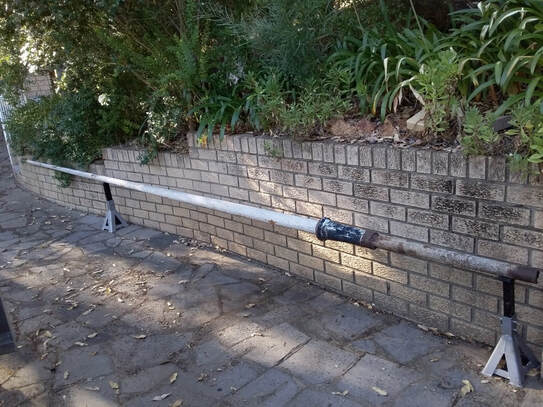 Pole. About 6m in length. Image J Paskulich
Added 23 Sep 2018
Short Tom public phone ca 1930? I bought this several years ago from a local lady who'd owned it for a couple of decades prior. She told me she bought it in "restored" condition from a local WA collector/dealer. In my opinion it was "over-restored" with the wrong dial fitted and the handset and all other brass parts polished back to bare metal and lacquered. It also had no keys so I couldn't do much with it. Recently, a local locksmith kindly made up new keys for me and I was able to open it up and return it to some semblance of originality.

It is the first I've seen with a halfpenny coin slot (I don't believe this was ever an Australian part).
​UPDATE:  I've since found out that, more than 30 years ago, a number of these phones were assembled in WA by a local man specifically for the collectables market. Apparently he had sourced a quantity of period surplus carcasses and spare parts and assembled them to order. The parts are mostly genuine but the phones are reconstructions. This information was given to me by a local gentleman (now well into his eighties) who said he assisted him at the time. 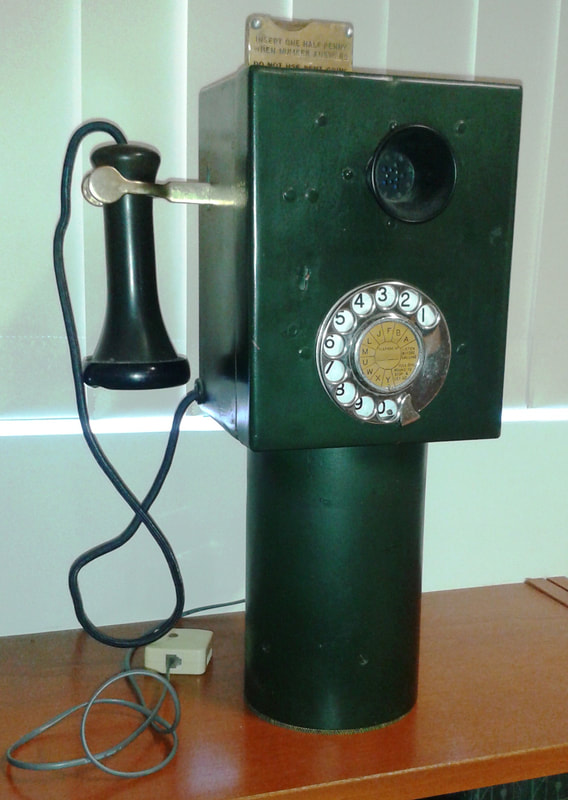 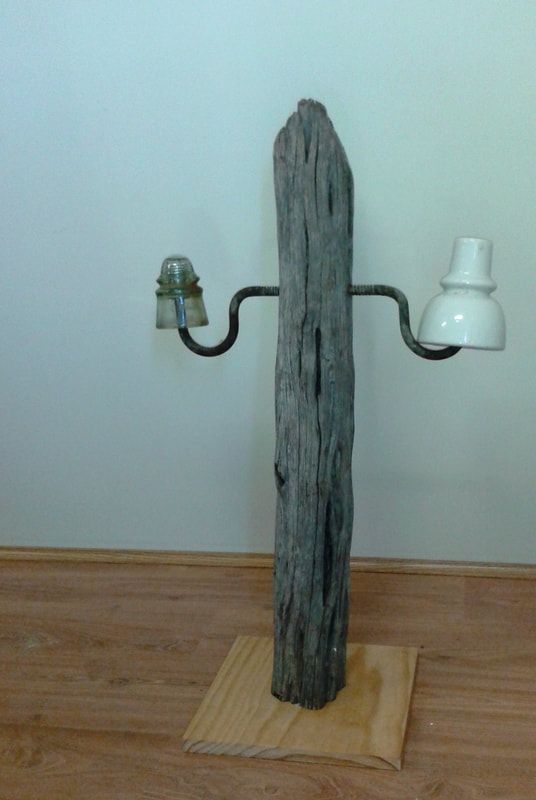 ​Added 27 April 2018
Replica AG Bell 1975 "gallows" transmitter/receiver. Purchased UK March 2018. This is a perceived copy of one of the experimental instruments built in the lead up to Bell's telephone patent application of 1876. I say "perceived" as I believe the originals are lost. This example is similar to a replica produced by the Bell Telephone Company in 1926, several years after A. G. Bell's death. Apparently it never actually transmitted satisfactory speech! 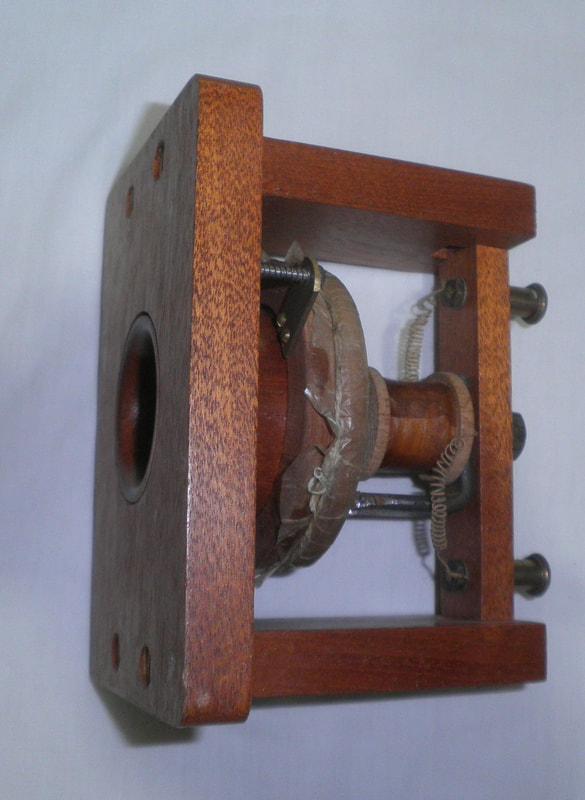 ​Added 27 April 2018
Early 1920s? French "hygienic" intercom phone. Purchased at a street collectors' market in Amiens, France in April 2018. Probably used in a wealthy household as an intercom phone. This instrument has the unusual "ice cream scoop" metal transmitter cone that could be disinfected against tuberculosis transmission. 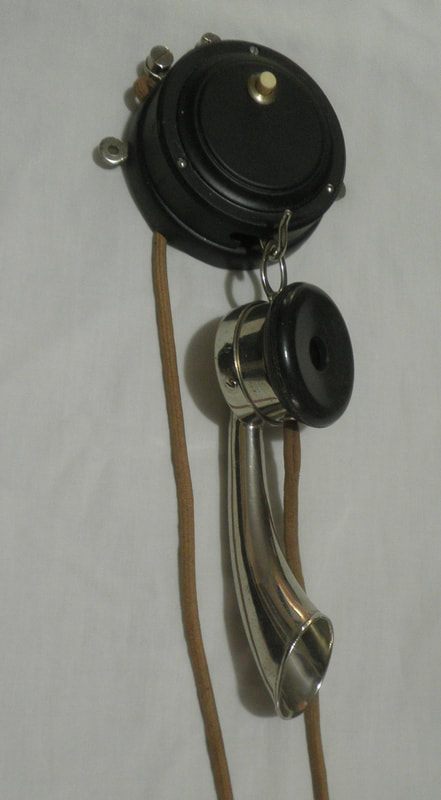 ​Added 15 July 2017
Yugoslav Bakelite CB phone ca 1950.  This telephone, probably manufactured in the Pupin factory Belgrade (Serbia), would have been used in Croatia as it has the Croatian script on the circuit diagram pasted inside the case. I bought this phone at a club auction recently in decrepit condition. I've since repaired and restored it. It is now in good working order. 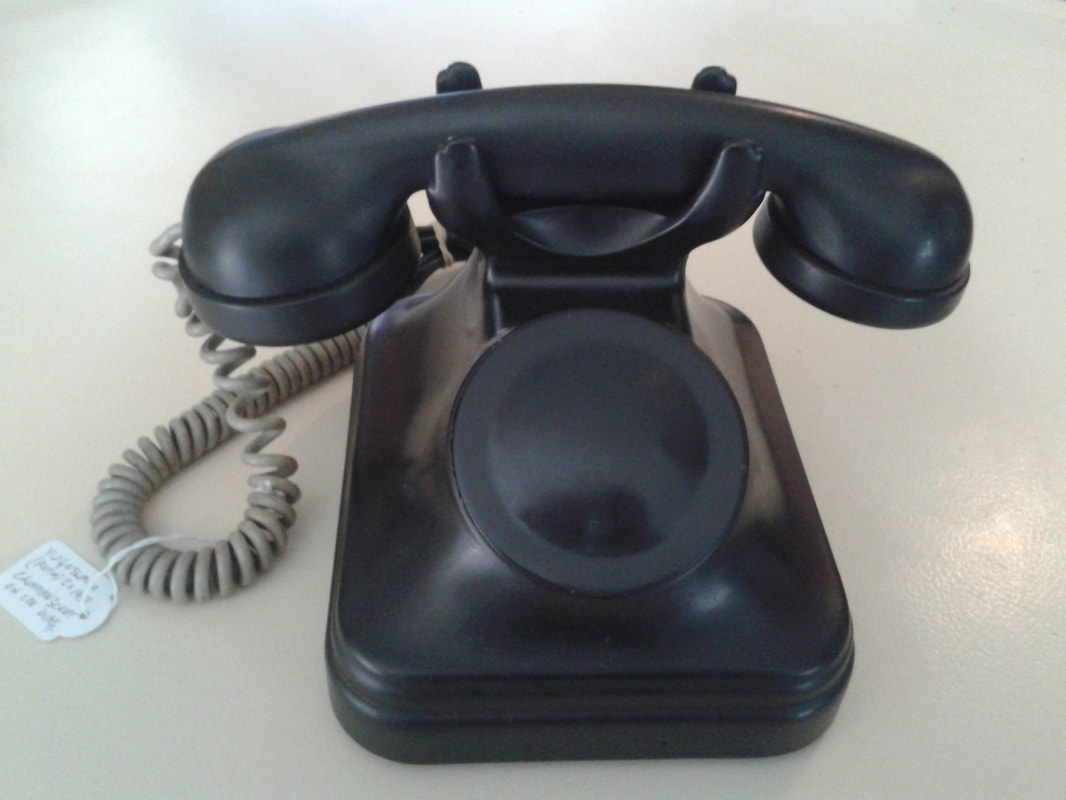 Added 15 Oct 2016
Ericsson DE500 "tin box" dial phone: I purchased it locally off "Gumtree" but this particular phone came to Australia from Finland. I believe a few examples of this model were briefly used in Australia, probably around the late 1920s - early 1930s. There were no other handset style phones available at the time, the only dial options being table candlestick or wooden wall models. The DE500 was quickly superseded by the introduction of Bakelite telephones. 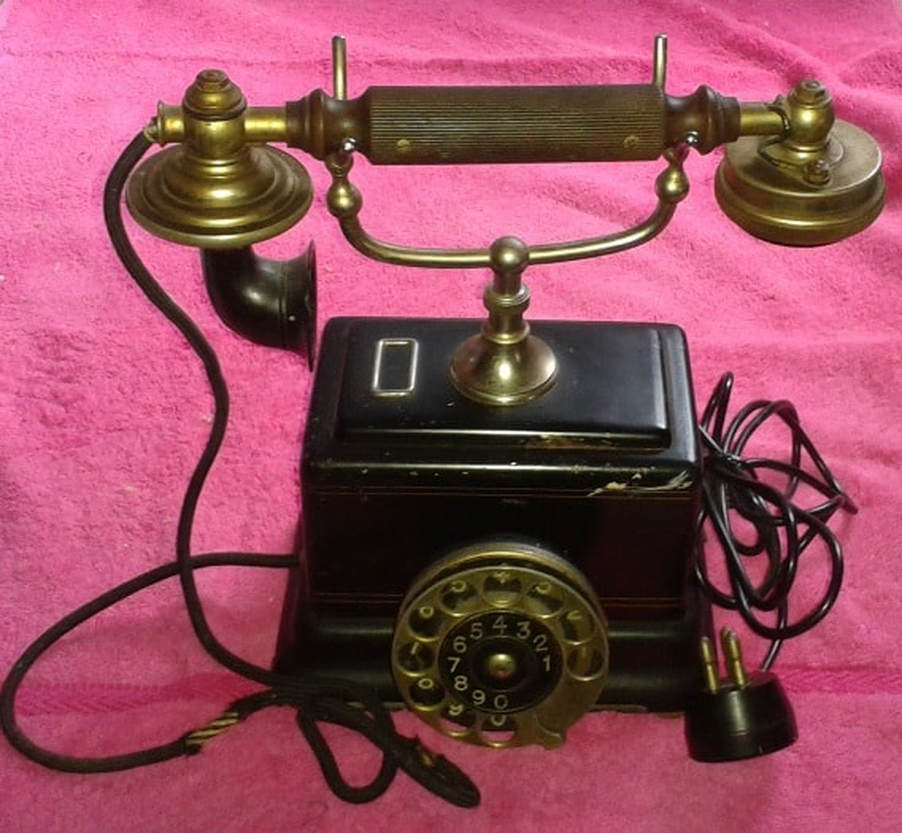 DE500
Added 23 Aug 2016
Three box wall magneto phone: I purchased this unit from the UK in 2015. Finally got the spares needed to complete it for display. It is a typical magneto phone of the late 19th century. This "three box" style first appeared in 1882 and was popular for a couple of decades. A similar unit used in Australia in the 1880s is shown at the bottom of this page.

I am satisfied it is British and from the late 19th Century. It is fitted with a "Hunningscone" carbon transmitter mounted on the centre box. Interestingly, the same box appears as a spare part in the National catalogue of 1903. The "electromagnet" logo on the transmitter box is the GEC label from the 1890s - 1920s and the top box appears, again as a spare part, in the GEC Catalogue of 1908 so it is obviously British and possibly National Telephone Company. Unfortunately the telephone company label at the top of the backboard is missing. The unit appears to be designed for short distance (inner-city) operation given the small two bar magneto generator and, I presume, watchcase receiver (This is the replacement part).  It also shares similarities with a British Consolidated Telephone Construction and Maintenance Co. three box phone described in their 1892 catalogue and an early 20th c.  International Electric Co. London "two box" phone sold in Australia by Thomas Draper and Co in Melbourne in the early 1900s. Below.
Powered by