In WA there were three major sites for technician and/or lines training over the 20th century. The were located in Lord St, East Perth, Ley St Manning and Guildford Rd Redcliffe/South Guildford (This school was built on the border of these two suburbs and both were recorded).  Non-technical training was delivered at various sites over the decades but not in dedicated, permanent training centres as far as I can ascertain.

Apart from the main office and some classrooms in a nice 1940s brick and tile building facing Lord St, most of the technicians school consisted of a mish-mash of old fibro, iron and weatherboard structures. 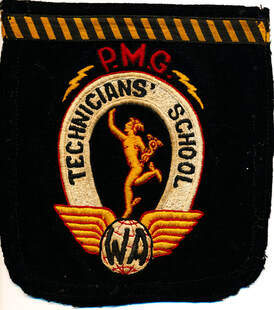 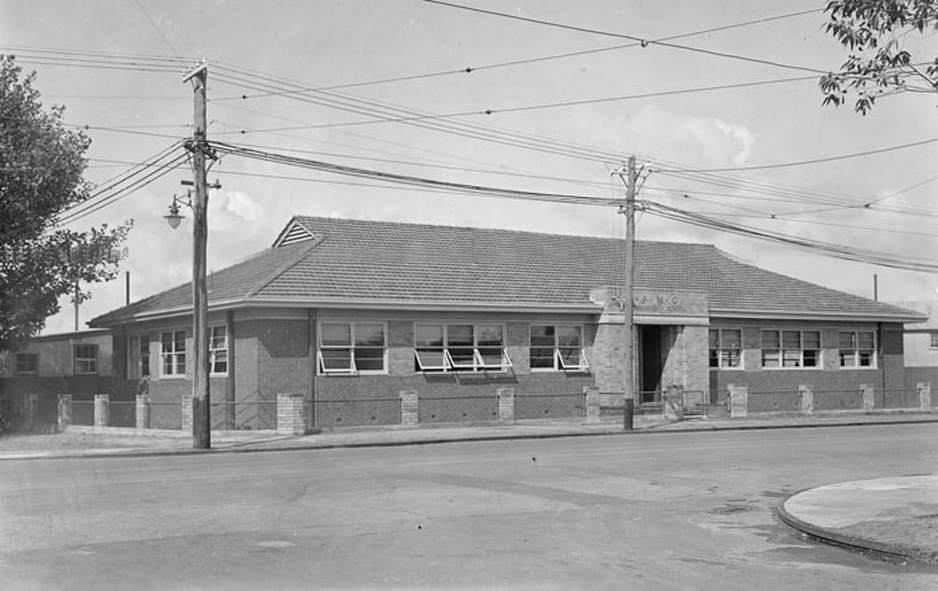 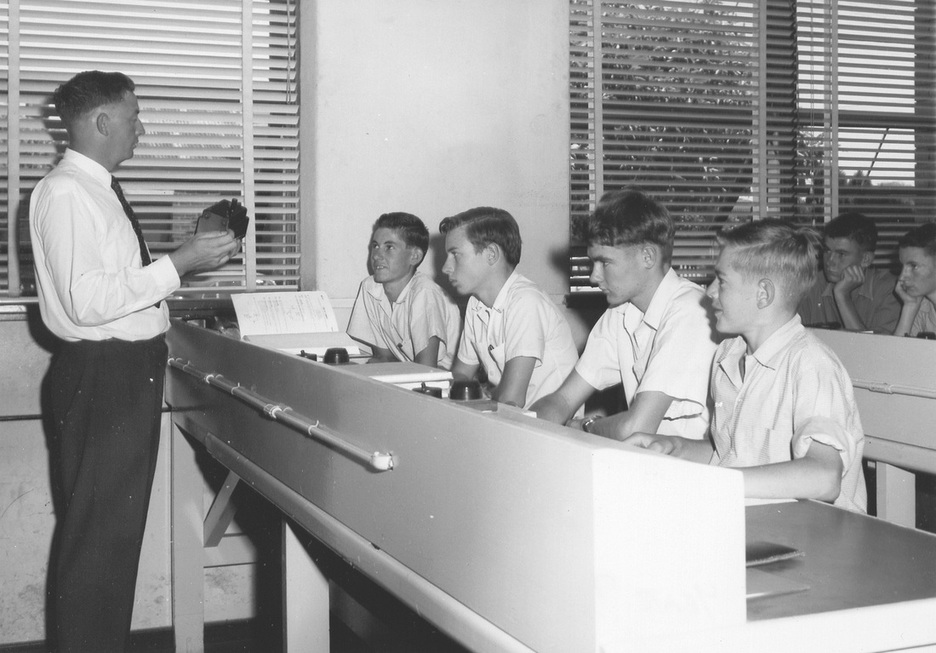 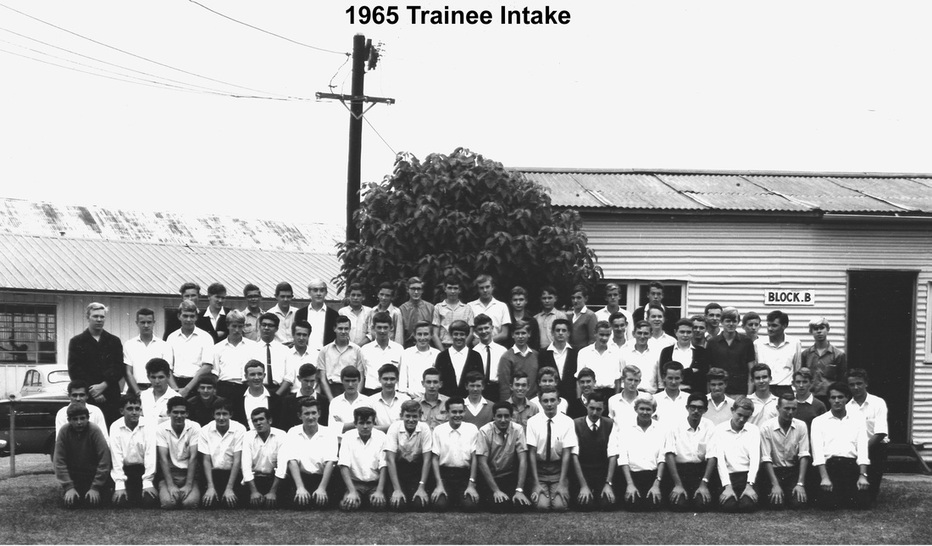 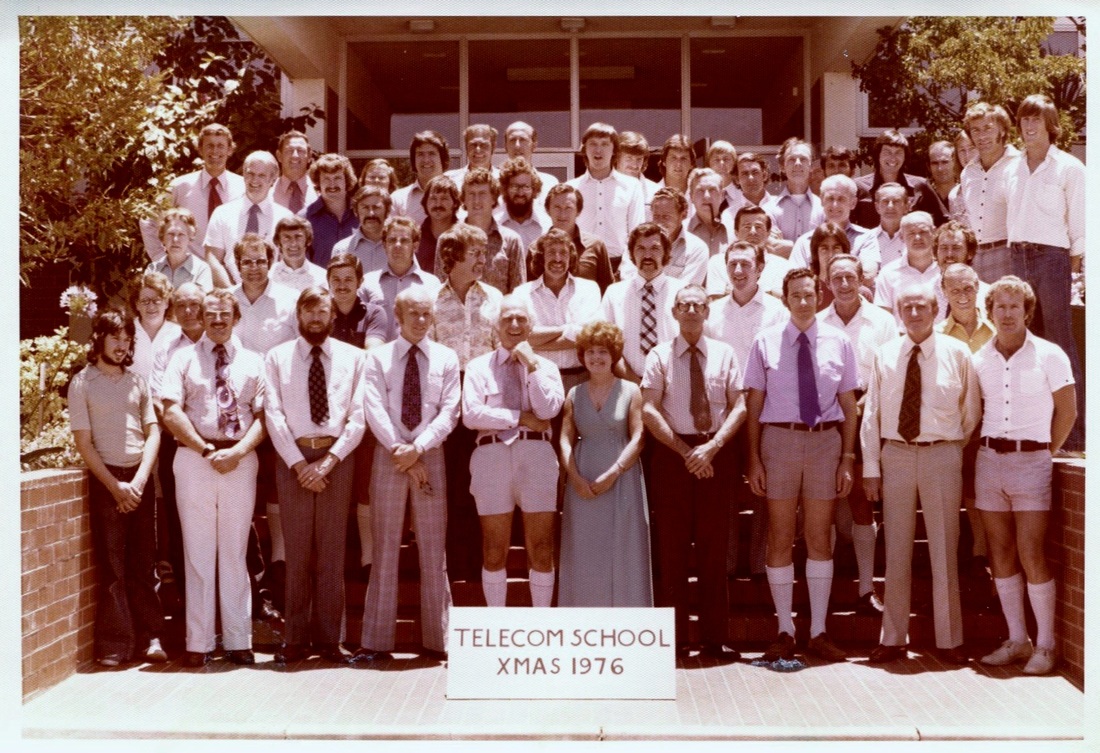 Technician School staff at the Manning Centre 1976 (Author centre, check tie)
WA Lines School
The WA Linesman School started in East Perth in 1934 as part of a national effort to standardise the skills across Australia. In the mid-1950s it moved to part of the "Dunreath" site on Great Eastern Highway Redcliffe/South Guildford, adjacent to the Perth Airport.

Comment by Mr R Herbert Jan. 2016:
"In the early days, the lines training school was also at the rear of the old Lord St training school prior to its move to Gt Eastern Hwy Redcliffe/South Guildford. In 1956 the low level aerial poles were still there adjacent to the brick wall where we used to receive instruction on the Sebco masonry drill and lead plugging. The poles were parallel to the railway line."
An interesting article describing Linesman training  in East Perth in 1952 appeared in the Sunday Times WA in June 1952. This article can be viewed by clicking "download file below". Source: National Library of Australia website.

Download File
Dunreath Lines School site Redcliffe/South Guildford
The Dunreath site history would be a page in itself. It was originally part of a colonial land grant, first to HG Smith and then John Scott from Lanarkshire, Scotland, dating back to 1833. Over the 19th century, the property changed hands a number of times and underwent various boundary changes and subdivision. Records show that by 1904 Dunreath had become a racehorse training property.   Around 1934 it was purchased by the Church family and converted to a golf club which in turn was acquired by the Commonwealth during WW2 for a wartime airfield and base. In the four decades after WW2 the Commonwealth land facing Great Eastern highway (now bounded by Ivy St and Apac Way)  was employed as the PMG Lines School and later Workshops and the remainder of the property was absorbed into Perth's Domestic and International Airports.

The Lines and Technicians Schools were amalgamated to the Manning premises in the early 1980s. 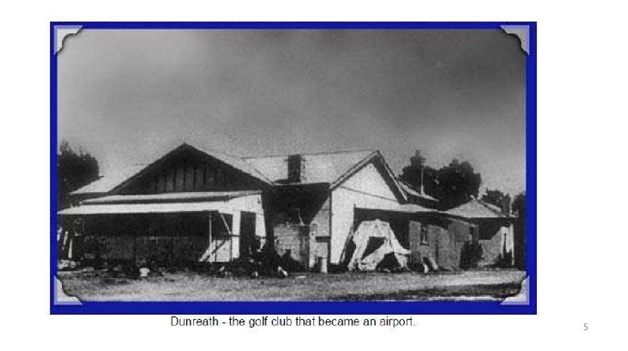 Dunreath homestead which I believe became the golf club-house, then a wartime facility and later the PMG Lines School office and amenities block. Source: http://www.perthairport.com.au/files/perth_airport_-_1944-1994.pdf
The end of an era
Telstra closed the Manning Training Centre in 2002. The property was sold to private interests and the buildings demolished a few years later in preparation for redevelopment. It seems redevelopment has stalled as the site is now (2017) an overgrown and derelict vacant lot.

Telstra is no longer in the technical training business.
​
PMG - Telstra Technical Qualifications and Training
From colonial times there was a formal structure of qualifications for technical/lines staff in the telegraph/telephone departments. For example, in WA in 1869, there is reference to "Electrician" - in charge of the Perth-Fremantle telegraph link. By 1888, the engineering jobs were clearly defined as Superintendent, Inspector, Fitter and Linesman. With Federation, and formation of the PMG Department, the technical roles were eventually formalised nationwide and, by about 1920, some of the technical designations (in ascending order of seniority) included Junior Mechanic (including trainees), Mechanic, Senior Mechanic and Exchange Foreman Mechanic. Following the title was a subscript describing the work area. Similar designations applied to lines (i.e. external lines and cables) staff.

In the mid-1940s the designations (but not the roles) were altered to (Telecommunications) Technician-in-Training, Technician, Senior Technician and Supervising Technician.

Engineers
Concurrent with the technical and lines structure, PMG/Telecom/Telstra maintained a hierarchy of professional engineers from inception. They held tertiary (usually electrical) engineering qualifications that entitled them to membership of a professional engineering association.  I found one historical reference to "Junior Assistant Engineer" dating back to 1908 and mention of various other higher grades such as "Divisional", "Superintending" and "Chief Electrical" Engineer scattered over the first half of the 20th century. Engineers' roles tended to vary with administrative demands over the 20th and into the 21st centuries but they  were generally responsible for higher level equipment and network design/dimensioning and sometimes had supervisory roles. In the PMG dep't and later Telecom Australia, Divisional, Superintending or Chief Engineers were effectively senior managers.

It is interesting to note that, in 20th c Britain, the term "Engineer" had a more generic meaning. A "Telephone Engineer" could mean technical staff akin to our "Technician" or "Lineman". Although I have found mention in BPO literature of "Technician" "Technical Engineer" and "Professional Engineers" which were similar to to our own Technicians, Technical Officers and Engineers of the same era.

I tend to refer to my own state of WA but the following technical training was conducted Australia-wide.

Telephone Mechanic
Early records are difficult to find but I understand the PMG implemented a "Junior Mechanic" course in around 1920? This persisted until the mid-1940s when it was was renamed/updated to "Technician in Training". I was able to briefly access a private archive recently. In 1935, a 16 y/o trainee "Junior Mechanic" was paid (including allowances) 78 pounds (£) per year and was eligible to enter a contributory superannuation pension scheme retiring at age 60. Upon graduating in 1940, now a "Mechanic Grade 2", he was paid £280 pounds annually. Not a particularly encouraging wage given the effort required to get to that point in his career. A quick scan of the internet reveals that, in 1940, the Australian basic wage was approx. £211 pounds p/a, a (male) factory worker could expect around £240 pounds and a senior clerk around £340  p/a.

Technician in Training (TIT) Course
The TIT scheme persisted from around 1945 until the early 1970s.

PMG/Telecom Technicians in that era were well trained. The TIT course was quite demanding and lasted five years. Trainees completed the first year as full-time students. In the December they were allocated their respective workplaces and then, over the next four years, completed on-the-job experience plus numerous, workplace specific, "unit courses" (short courses of one or more weeks duration). Every topic was examined with a minimum pass mark of 60%. Failure of any topic or unit was treated seriously and could mean discharge from the course if it continued. Trainees were paid during their training so there was significant incentive to perform. The training week was nearly 37 hours long and I estimate  a TIT completed 2500+ hours of formal classroom training during the five years. Sample public selection tests below.

If you compare the TIT/apprentice courses to technical training in the first decades of the 21st century; a TAFE Electrical/Electronics Advanced Diploma requires about 1500-1700 hours of training on campus. An Electrical apprenticeship (Certificate III) requires about 700-800 hours of formal training plus on-the-job experience spread over four years. The introductory technical courses aimed at new Telstra or NBN staff (offered by a range of private training providers) generally involve a few hundred hours of training over a 6 -12 months period.

Other training
Other related courses ran concurrently with the TIT/ATT during the 1970s - 1980s, These included:

Telecommunications Assistant in Training (TAIT). For entry level technical PMG/Telecom staff. These were conducted mostly during the 1970s. They were short duration courses of around 200 hours in class, followed by appropriate on-the-job experience.

Technical Officer in Training (TOIT). To progress beyond Technician level in the technical ranks, candidates needed to achieve higher PMG/Telecom credentials. Originally these were attained by internal examination which enabled Technicians to be promoted to "Senior Technician" and above. An early example appears below.

1971 saw the first candidates accepted directly into a course that enabled promotion to Telecommunications Technical Officer (TTO) - the new Senior Technician - immediately upon completion. The course was six years long and consisted of three parts; a Diploma in Electronic Engineering (Dip Electron Eng) from an external Technical College (later known as TAFE), specific telecommunications training at the Technicians School (Manning Training Centre in WA) and on-the-job experience. Satisfactory completion of the six years training enabled promotion to Technical Officer. This course persisted into the 1980s.
​
Bridging Technical Officer Course
In the mid 1970s the above-mentioned TOIT course was supplemented with a version known officially by the unwieldy title of Training for Eligibility for Appointment, Promotion, or Transfer to Offices in the Technical Officer Structure, This course was aimed at existing, qualified and experienced Technicians already employed by PMG/Telecom Australia. Candidates were selected by a competitive entrance test and numbers limited to available TO vacancies. The  external Tech. College component was substituted with a correspondence course run by PMG/Telecom HQ Training Section based at 210 Kingsway Melbourne and candidates were expected to complete the correspondence training and assessments in around 12 months. In addition they undertook selected unit courses conducted at their respective Technicians School.  The delivery costs and duration of this pathway would have been considerably less than the above-mentioned TOIT course and it also provided a promotional opportunity for technicians. Sample selection tests appear at the end of this page.

I recently (2019) received this note from a graduate of the above Bridging programme. “In 1996, the Telecom Technical Officer Bridging Course was recognised as an Associate Diploma of Engineering (Electronics) by TAFE Victoria and certificates were issued to past students. I have one on my wall.” By 1996 Telstra Learning had achieved RTO status and would have applied RPL to achieve this. See below. 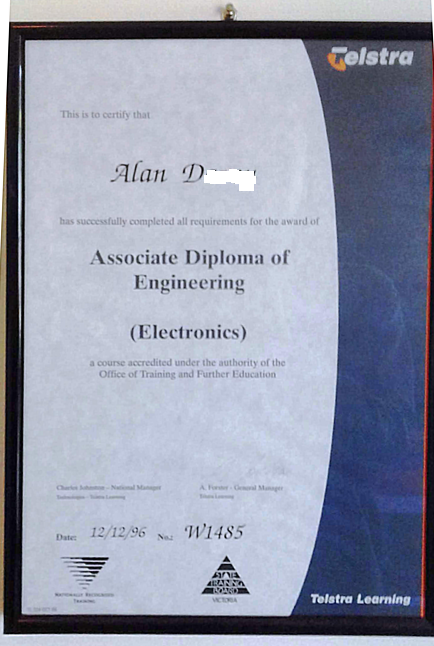 Ultimately all VET institutions needed to become nationally “Registered Training Organisations” (RTO). One significant platform was the concept of “Recognition of Prior Learning” (RPL). A standardised approach to assessment of prior training or experience to give credit towards a qualification. Further information on the NTS can be obtained from the report by Kaye Bowman, Suzy McKenna (2016) ​The development of Australia's national training system: a dynamic tension between consistency and flexibility here

Other courses
Other schemes popped up as well. During the mid to late 1980s, the TIT descriptor reappeared as "Bridging Technicians in Training". These candidates were experienced Technician's Assistants who were retrained as Technicians. Given their work experience, the course duration was shortened compared to past versions.
I also remember a Technicians course, exclusively for aboriginal students conducted during the 1980s in WA. Surprisingly, I can't find any recorded information on this course.

In the 1990s, Telecom Australia/Telstra's focus shifted away from traditional apprentice and TO training and diminished to the point that WA's Manning Training Centre shut down completely in 2002. Other states followed.

Please note: I have written the above descriptions mostly from memory (I worked at the Manning Training Centre for many years). If you see any errors or can add information please contact me.
​
Senior Technicians Exam 1945
This is the earliest version of this exam ​that I can find. It consisted of three papers. Two are complete, one is a fragment

Download File
​PMG Technician-in-Training entrance exams 1956
The following pdf files are scans of the three Post Master General Department, Technician in Training entrance exams conducted in September 1956 in Perth Western Australia. Examinations of this type were aimed at Junior Certificate (Year 10) graduates and used for decades as the selection filter for PMG, TIT candidates across Australia.  Competition was fierce among the many applicants. I entered the PMG in WA under this scheme in January 1965 and for that year there were  hundreds of applicants for 65 positions.

Click on the relevant download file below to open. Remember; 1956 was before the personal calculator was invented. All maths calculations had to be completed long-hand and formulae remembered.