Western Australian Telecommunications History
This section contains miscellaneous historical information on Western Australian telecoms. Click on the relevant link for each page.
​
Contents
1869 - 1901 1901 - ​
1869 - 1901
Western Australian colonial telecommunications
WA's telecommunications started with the Perth - Fremantle telegraph in 1869 and by Federation there was a telegraph network that spanned the length of the colony and connected to the eastern states and internationally, as well as a dozen telephone exchanges with nearly 2500 subscribers. To view the full text click here.
​
1901 -
Early days of the PMG in WA
This page looks at the history of WA telecomm's for the first couple of decades after Federation. For full text click here.

1914 Central First Automatic (Dial) Telephone Exchange in Western Australia​
In 1914, Perth Central Exchange was the biggest in Australia and the first to service a central business district but until publicised on this site back in 2014 it never even rated a mention  on any other Australian telephone history site. To get the full story click here.
Katanning WA Telecommunications page
This is a page about telecommunications history in this Great Southern WA town. Congratulations to researcher K. Porteous. https://lostkatanning.com/telecommunications/​​
Western Australian Country Telephone Exchanges at 1976
Rescued Telecom Australia document listing non-metro exchanges at 1976. Courtesy Mr R Herbert. The list has been split into two parts to satisfy file size limits on this page. Click on download file below, pages 1-7 and 8-13.

Download File
Telephone transmission systems
From about 1960 there was rapid development, Australia-wide, of high capacity "long line" telephone transmission systems.  By the mid 1970s the majority of subscribers had a national dialling system (STD). The following articles describe mostly WA's systems but mention is made of simultaneous development in eastern states. The two major transmission technologies employed at the time were underground coaxial cable and microwave radio systems. Full text and details click here
​Telecoms training WA.
​A brief history of WA PMG/Telecom Australia/Telstra Technicians and Lines Schools can be viewed if you click here.
The PMG/Telecom Workshops in WA
Most states had their own workshops that manufactured and repaired or refurbished a wide range of telecommunications equipment. In WA, workshops were initially in Central Perth, later moving to East Perth, then to Crowther St Bayswater and 342 Scarborough Beach Rd Osborne Park prior to the building of the extensive facility in Redcliffe (South Guildford) in about 1974.  Everything from metal fabrication to telephone refurbishing was undertaken at the new centre which was adjacent to the Lines School and Perth Airport .

By 1920 there was a "Commonwealth Telephone Workshop" located in a lane between Murray and Wellington St (near Pier St). It was extensively damaged by fire in Jan 1920. Several images of this event are available on the National Archives of Australia site (http://recordsearch.naa.gov.au/)

Workshops fire 1920. Image source: http://recordsearch.naa.gov.au
​By 1940 the Workshops were located in Lord St East Perth (site of the Technicians school I attended a quarter of a century later). In fact, I clearly remember the blacksmith shop that was still there in 1965. Interestingly, the only reference I can find on-line is to a fire in June 1940! Ref. http://trove.nla.gov.au/ndp/del/article/46723823

​After WW2 the main parts of the Workshops (minus the blacksmiths shop) were relocated to a former wartime aircraft factory, built in 1942, in Crowther St Bayswater. Former employees have mentioned a telephone, switchboard etc. refurbishment facility at 342 Scarborough Beach Rd Osborne Park prior to the building of the  new  facilities at the old "Dunreath" site in Redcliffe/South Guildford, opened in the mid 1970s.

A description of the Crowther St Bayswater site. "The main factory buildings were of saw-toothed roof construction with corrugated iron roofing and fibre cement cladding above a low brick wall below window sill height. The casement windows in the side walls were arranged in groups of four, giving the effect of a continuous horizontal band." From the Heritage WA site (http://inherit.stateheritage.wa.gov.au) 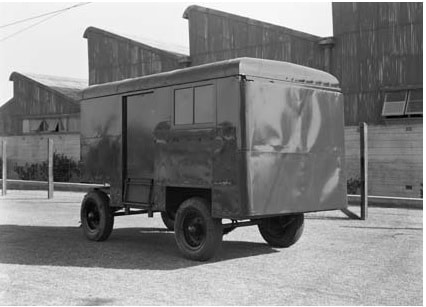 Crowther St Workshops 1950 with an amenities caravan in the foreground. Image source: http://recordsearch.naa.gov.au/
​Recently (May 2019) I was informed by a former employee that the Redcliffe/South Guildford WA Workshops were winding down in the early 1990s and closed by 1994. The site has been extensively redeveloped and no evidence remains of its past use.
The speaking clock
The main article about the speaking clock first installed in the east in 1954 is available  here.
Western Australian history of its speaking clock service courtesy former PMG officer Bernie Elsner:

"At the Main Trunk Exchange in Perth Western Australia in 1961, there was still no 'Speaking Clock'. Trunk room operators worked half hour shifts speaking the time into a microphone for callers to 014. Within a year that was replaced by a Siemens tape drive speaking clock rack connected to two massive pendulum clocks. You had to be a Super Tech to work on that system.  We also had magnetic drum Weather and Sport machines installed then which we were allowed to service. One of my supervisors was prone to using quotations from Shakespeare to test the recording machines. On one noteworthy occasion he mixed up which machine was on line and callers to the weather 016 were treated to the full rendition of Portia's speech from the Merchant of Venice, "The quality of mercy is not strained. It droppeth as the gentle rain from heaven," etc. for several hours until complaints filtered through."
Added courtesy B Elsner​ 27 Nov 2019
"Jim Hatch has found a photo of WA's original Speaking Clock equipment taken in 1964. As I recall there were two racks of the tape units side by side. Equipment 1 & Equipment 2 plus Equipment 3 & Equipment 4. Each rack had an automatic failure detection system which switched over clocks to the second tape unit if there was a fault on one unit. A second rack provided diversity by allowing manual switch over in case both tape units on one rack went faulty. One of a pair of Pendulum wall clocks is also shown, these provided time accuracy for the tape units and diversity in case of inaccuracy, or failure."

"Taken in the 'Clock Room' a small ~2.5m x 2.5m cubicle in one corner of the 2nd Floor PABX room which housed the GPO PABX. This became a favourite 'resting room' for MTX staff, with a contact switch on the PABX room entry door that sounded a buzzer when anyone entered the PABX room." 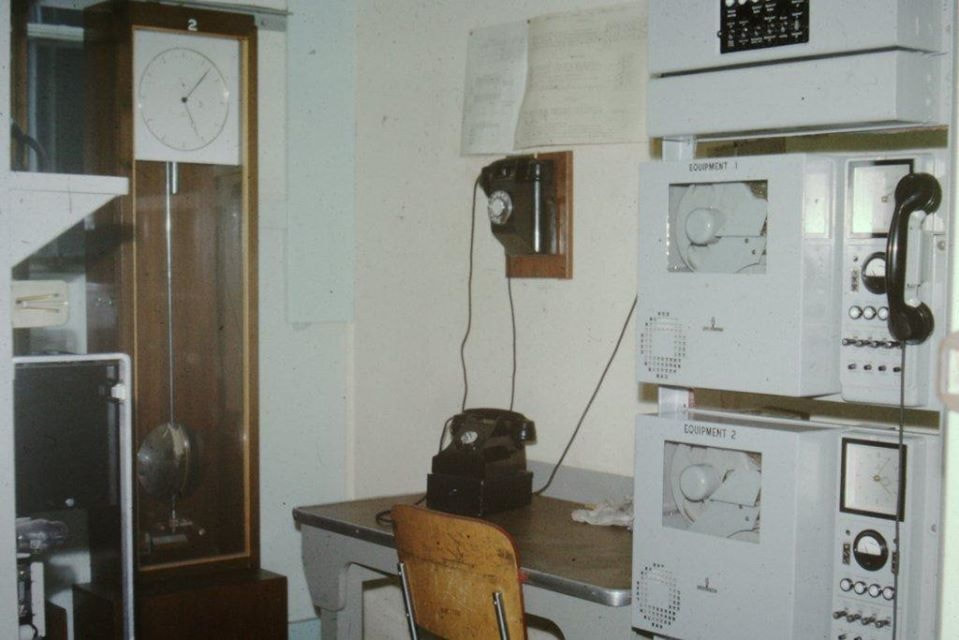