What does all the telecommunications jargon mean?
To the novice collector, the various, historical, telephony technologies and jargon used may be a little difficult to understand. The following topics are discussed below:
Contents
Telephone Exchanges
Manual exchanges:
At the customer's request the telephonist performed the connections by hand at the switchboard.

​The 1937 image below is of a small Australian semi-rural manual exchange (Kalamunda - about 25 km east of Perth WA) - typical of the first half of the 20th century. The telephonist (believed to be Miss Doreen Penrose) is sitting at the manual switchboard and cable distribution frames are visible in the background. Left rear is what appears to be a small "pyramid" cordless switchboard (example below). There was a small exchange in Kalamunda from 1911 -1921 prior to the construction of this post office. It is even possible that this was it and simply relocated to the new premises. There was a forestry party-line (see below) in the area to the east at the time - it may also be part of that (Party lines discussed below). 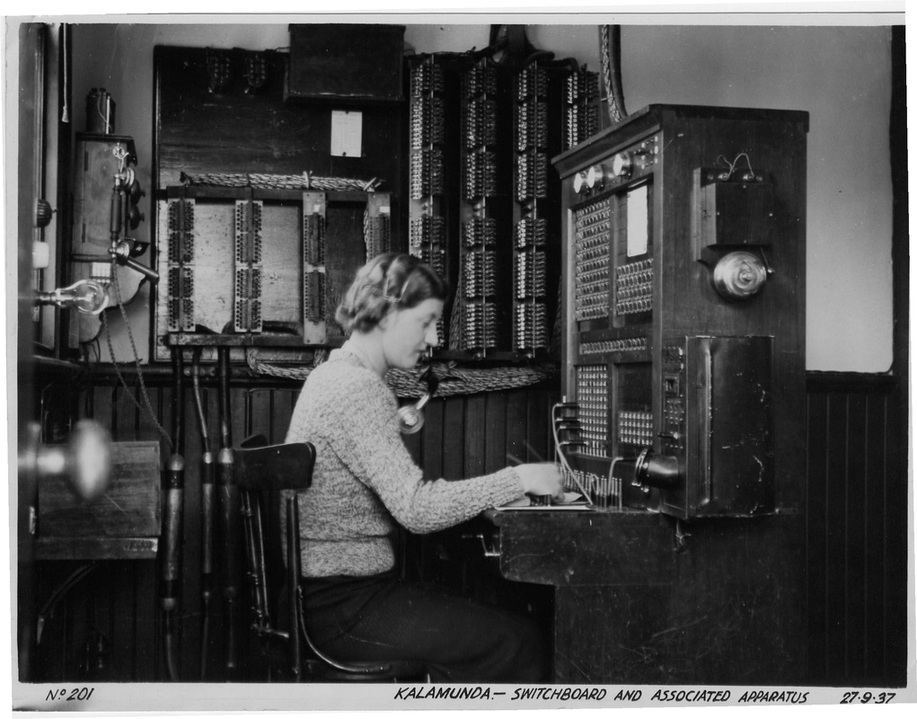 Manual exchange Kalamunda WA Post Office 1937. Telephonist believed to be Miss Doreen Penrose. Image source: old PMG photograph
Automatic exchanges and PSTN:
Manual exchanges were progressively replaced by automatic switching from 1912 in Australia. Although both technologies existed concurrently in the Australian network for most of the 20th century. Connections are/were made over a (mostly) copper wire network and switched automatically by electrical/electronic equipment in the telephone exchanges. Dial pulses or tones from the telephone signal the required number to the exchanges. The automatic telephone system is known (worldwide) as the PSTN (Public Switched Telephone Network) and sometimes nicknamed POTS (Plain Old Telephone System!).

​Analogue exchanges
The original automatic exchanges used analogue transmission and electro-mechanical switching technologies and dialling signals were originally DC electrical pulses from a rotary dial. This method is referred to as impulse, decadic, loop disconnect or rotary dialling depending on whose book you read.

Digital exchanges
Today's exchanges are mostly electronic, using digital switching techniques similar to modern computers. The customer's phone uses DTMF tones from a keypad to signal the exchange, although at the time of writing (2014) many Australian exchanges will still accept the obsolete dial impulses.

Analogue telephones
It is interesting to note that modern telephone exchanges had moved away from analogue transmission and switching to digital technology by the start of the 21st century but the telephones remained analogue devices. The solution was to provide analogue to digital conversion at the customer interface in the new digital exchanges.  This has flowed on to today where typical NBN modems provide an analogue telephone port so customers can continue to use their traditional telephone, even though the transmission path is now digital from end to end.

Simplified idea of the PSTN also showing its relationship with the mobile (cellphone) network and private branch exchanges. Image source http://www.informit.com/articles/article.aspx?p=27374
Automatic telephony tones
To advise users of the progress of a call, a range of standard tones were used. This Youtube clip gives a very clear rendition of tones from around 1950. https://www.youtube.com/watch?v=223k6xxIkbo
It is British Post Office but virtually the same as Australian. In fact, the voice is possibly of the Australian actor Gordon Gow who worked in the UK in the 1950s. Gordon was the first voice of the speaking clock here installed in Victoria and NSW in 1954. 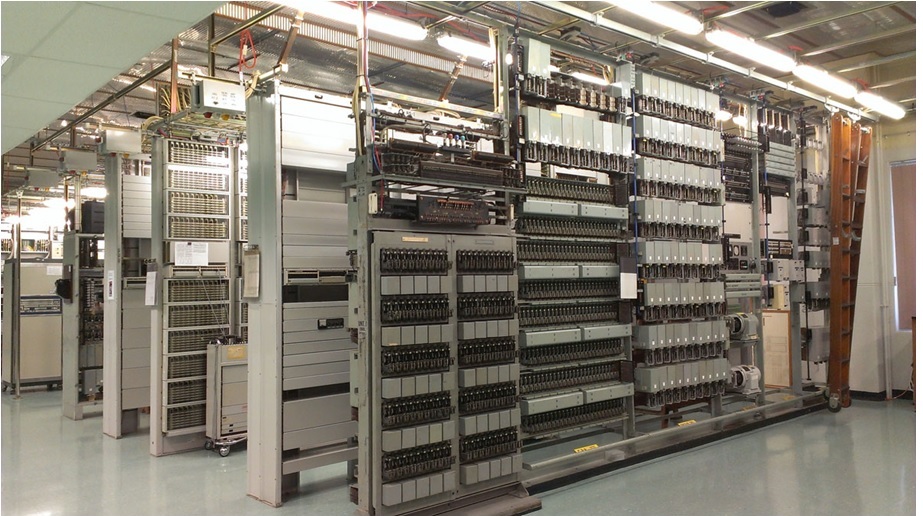 Demonstration electromechanical (i.e. analogue) telephone exchange equipment at the Victorian Telecom. Museum. Step by step equipment in the front bay and crossbar type further back. In a modern digital exchange, equivalent switching capacity would be contained in a couple of racks! Image source: J. Paskulich 2014
PBX and PABX
The terms private manual branch exchange (PMBX), private automatic branch exchange (PABX) and private branch exchange (PBX), refer to privately owned telephone switching networks used to manage telephony in businesses, college campuses etc. Historically they were based on manual switchboards but automatic systems soon became popular. Typically they consisted of centralised switching equipment, a number of telephone "extensions" and some "exchange lines" connected to the public network. Sizes varied enormously from small systems with a few extensions through to large systems comparable to a small PSTN exchange. Since their inception in the early 20th century they have become progressively more sophisticated and the term "PBX" now tends to cover all types. An associated topic, Digital PBX, is introduced here.
There is a good description of PBX/business systems systems and their history at:
https://en.wikipedia.org/wiki/Business_telephone_system
The Customer Access Network (CAN)
The CAN is an acronym that regularly pops up. This is/was the copper wire network between customers and their local exchange. It comprises/ed a network of pair cables and cross-connect units called cabinets, pillars and MDFs (main distribution frames). The MDF is the equipment that terminates cables and allows cross-connections and are located at both the telephone exchange and in larger customer premises. More information on the technical aspects of telephone cables etc. can be found here.

The CAN is of particular interest today. The original intention was to wholly replace it with an optical fibre/digital transmission network as part of the National Broadband Network (NBN). This idea has been largely superseded by the Fibre to the Node (FTTN) system. In FTTN, most of the copper cabling and hardware from the exchange is replaced with optical fibre but it retains the final section of the copper wire CAN from pillar to customers (DA - distribution area). Go here for more information of  NBN FTTN.
Telephone technologies in 20th Century Australia
From Federation in 1901 through to the turn of this century, there were four main telephone technologies in the Australian network and they often existed concurrently. These technologies were:
Technical information on repair of early telephones here.

By 2021 most of these technologies will be a distant memory, the two significant telephone technologies will be mobile (cell-phone) and NBN/internet VOIP telephony. ​
Local battery/magneto systems: These were specific to point-to-point telephone connections and the earliest manual exchanges. Each phone had a local battery, typically 3V, that powered the transmitter circuit and this battery was either mounted in a separate box, or in the bottom half of the case in the old wooden wall-phones. Outgoing signalling was typically via a hand wound, alternating current (AC) magneto generator attached to the phone. Incoming calls were signalled by a bell compatible with the magneto generator.​
The image below shows an example of an early to mid 20th C., wooden, wall,  magneto telephone. The local battery (2 x 1.5V "no. 6" dry cells) are in the bottom half, the magneto generator and handle appear upper right and the rear of the bell can be seen upper door. The handset is not visible but suspended from the switch-hook on the left side. 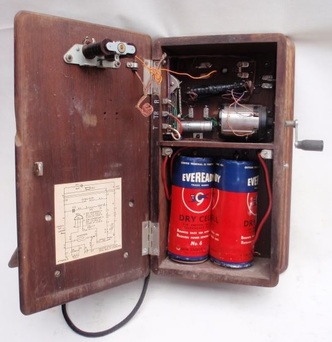 Single wire earth return line: The original telegraph lines were single wire/earth return.  The line consisted of one wire  (galvanised iron or copper)  installed on insulators on poles. Stakes into the ground at both ends made contact with the earth which acted as the "second wire" or return path for the signal. This system worked well for telegraphy but put a lot of electrical noise into telephones. In WA all telephones were LB/magneto and operated over single wire lines until 1911. All modern telephone lines are two wire working.
Party lines: The ubiquitous magneto "Party line", still remembered by some older country residents, was where several customers were connected back to the exchange over the same line. Signalling to individuals was via a system of coded rings (I believe based on Morse code). Privacy was non-existent! I remember working on a magneto party line near Carnarvon W.A. as (relatively) recently as 1985. The  last Western Australian public manual exchange closed in Tenindewa (a small wheatbelt town approx. 100 km east of Geraldton) 13 April 1985 and the last manual exchange in Australia closed at Wanaaring, NSW December 1991. 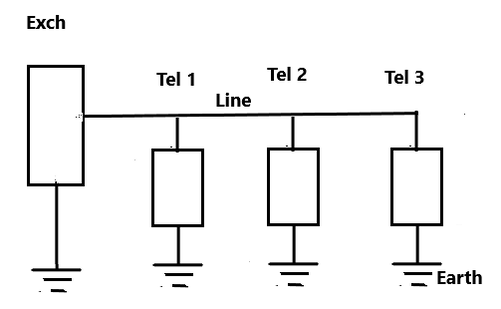 Concept of a party line. In this example three subscribers share a single wire - earth return line (described above)
A major advantage of the above local battery/magneto phones is that they worked reasonably well over these relatively poor quality earth return lines and examples persisted in some places in Australia into the second half of the 20th century. A great story about how robust and effective these primitive lines were, can be read at:
http://www.honeysucklecreek.net/other_stations/carnarvon/Hamelin_Pool_GT1.html
Battery ringing telephones: Perusing early catalogues I've often noticed "battery ringing telephones". These work in a similar fashion to the above local battery/magneto telephones except that they were fitted with a direct current (DC) "trembler" bell and push button. The local battery powered both the transmitted speech signals and called the far-end bell when the button was pressed. This type of phone was generally used in private "intercom" applications rather than the public telephone network.
​ 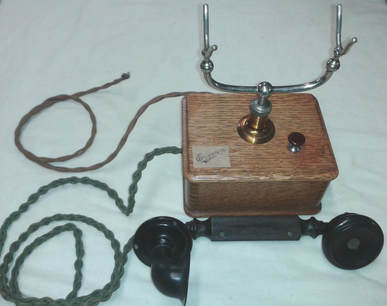 Example of a battery ringing telephone (ca 1915 UK Ericsson N1100). Image source J. Paskulich
Central/common battery (CB) systems: The central (or common?) battery system was introduced into manual telephone exchanges in the late 19th century. Rather than local batteries at the customer end, the telephone exchange supplied the energy to the phones from a rechargeable battery bank at the exchange. Vintage CB phones are easily  recognised as they have no dial, generator or local battery connection. The customer simply lifted the handset which in turn operated an indicator at the exchange upon which the telephonist answered and dealt with the call.

Although originally used in the later manual exchange networks, the CB technology easily transferred into the PSTN and the principle is still used (2017) by automatic telephone exchanges. Because it is independent of mains power, the CB system is the reason your traditional corded PSTN phone still worked during a power failure. 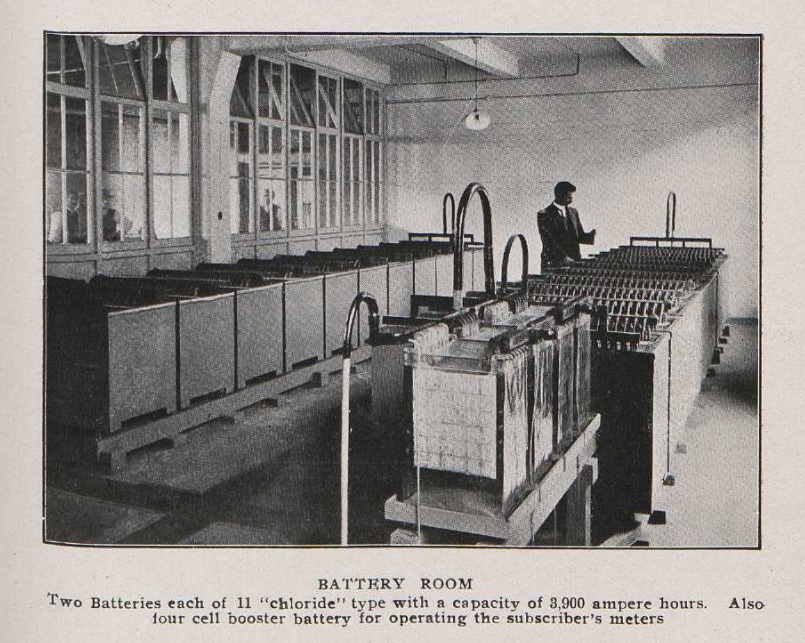 Example of an early common battery system: Melbourne telephone exchange battery room 1912 (from Victorian Institute of Engineers publication 1912)
Analogue and digital telephony: The first automatic exchanges were electro-mechanical, analogue systems but over the course of the 20th century they evolved into sophisticated electronic, digital systems. These topics are discussed elsewhere on this page.

Mobile telephony
The ubiquitous mobile (cell) phone is now probably the biggest single personal inter-communications device in Australia (if not the world). There is a page dedicated to mobile telephony here.

NBN: In the mid 1980s Telecom Australia proposed to implement a nationwide digital broadband telecommunications network by the start of the 21st C. Unfortunately this plan went awry and it is two decades late. Operating largely over optical fibres, the National Broadband Network is an integrated high speed data communications network that will connect all Australian premises to the internet. Eventually (2021?) our copper wire PSTN will be absorbed into the NBN and disappear. Go to ﻿this page ﻿for further information on the NBN
Powered by