Mobile Telephony
​A modern mobile telephone, also called a "cell-phone" and, latterly, a "smart-phone" is a sophisticated radio transceiver that interfaces to the telephone network/internet. In its simplest form, a cell-phone behaves like a typical "landline" telephone except using radio waves instead of cable pairs. Over the last couple of decades, developments in micro-electronics and digital technology have seen the rise of the "smartphone" where the instrument has effectively become a hand-held computer with an associated telephony option. The smartphone can connect to the internet via the digital mobile telephone network (or local wi-fi networks, if available) and behave like a computer. Alternatively, it can be used as a straightforward mobile telephone.

In 2015 there were approximately 10 million landlines in Australia but around 32 million mobile services. Australia had far more mobile phone connections than people! Since then, "landline" telephony has almost disappeared with the imminent completion of the NBN, as these phones are now merely internet peripherals off the NBN modem.

​Mobiles/Smart-phones now dominate our network.
​
Contents
History
The ideas of radio-telephony blossomed after WW1. An amusing article about the first "carphone" of 1920 can be found at the Smithsonian site:
https://www.smithsonianmag.com/history/the-worlds-first-carphone-24664499/
The facts in the article are very limited and, apart from one newspaper report, apparently unsubstantiated, but it appeared to be a telephone instrument interfaced to some kind of early radio transmitter and receiver, albeit with limited range. It was, in effect, an early two-way radio.

Australia can lay claim to the world's first substantiated, transportable, two-way radio. Senior Constable Frederick William Downie of the Victorian Police developed the first mobile two-way radio in 1923. These radios were fitted to selected vehicles, making Victorian police cars the first in the world to be equipped with wireless communication. More information at: https://cv.vic.gov.au/stories/a-diverse-state/trace-the-secrets-behind-police-technologies/wireless-patrol/pop-downie/
and
​https://cv.vic.gov.au/stories/a-diverse-state/trace-the-secrets-behind-police-technologies/wireless-patrol/the-wireless-patrol-a-world-first/
​Early mobile Telephony in Australia
From around 1947 in the USA and a little later in Europe, various mobile radio-telephone  systems, that interfaced into telephone networks, were developed and implemented. They preceded our modern cellular mobile telephony systems. As such, are sometimes retrospectively nicknamed "pre-cellular" or "zero generation" (0G).

​The Australia PMG had its own "Mobile Telephone Service" from 1950. Permanently installed in vehicles, it used valve radio transceivers employing phase modulation and operated in the VHF band in the range 156-170MHz. Each unit was connected back to a base station and then to a manual switchboard. At the time, this service was very exclusive, being limited to 100 for each capital city and a maximum of 12 calls at any one time!

​​Various forms of these manual operator "carphones" persisted until the 1980s. A detailed technical description of the original system can be read in the Telecommunications Journal of Australia, Feb 1950. Accessible at this site: http://www.coxhill.com/trlhistory/history/australian_publications.htm
and what it looked like below:

AWA car telephone ca 1950-60. Showing L-R, speaker, transceiver and power converter and control/telephone handset below. Image source: https://tamworthpowerstationmuseum.com.au/communication/awa-car-telephone/
Automatic Mobile Telephony
Automatic mobile telephony arrived in Australia with the first call made on the 9th August 1981. It was in the form of the "Carphone". An analogue mobile system built into a vehicle, the Public Automatic Mobile Telephone System (PAMTS) enabled users to dial directly into the public switched telephone network (PSTN) for the first time.

Supplied by NEC, PAMTS was not a cellular system. It operated in the UHF 500MHz band and used the number range 007. Portable models also existed but, by modern standards, they were huge. Made obsolete by its successor, the AMPS cellular network, PAMTS was shut down by Telecom Australia  in 1993.

​1981 video of Australia's first automatic mobile service: https://www.youtube.com/watch?v=YMdSIyUXt4s&fbclid=IwAR0fwouGNomuts_38VdlSHaspf9Zpr4dcFC-oUWEJ9oUrq8vUBIPqknYeqc
1G
The first Hand-held Advanced Mobile Phone Service (AMPS), instruments appeared in 1987. Operating in the 850 MHz band, they were first generation cellular mobiles but still employing analogue radio technology. Initially very expensive (nearly $5000) and disparagingly known as "bricks" due to their large size and weight, within a few years the instruments had shrunk to a much more manageable size and cost, along with improvements in battery life and transmission performance. ​In modern times this system has retrospectively been labelled 1G.

Privacy and security were issues with these analogue systems. For example, the speech signals could easily be picked up by radio scanners. This analogue mobile network was phased out progressively and completely replaced by digital encryption technology by 2000. 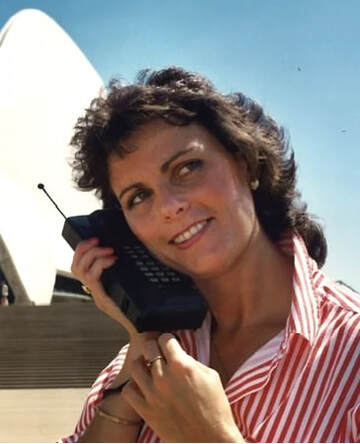 1987 AMPS mobile telephone. Siource 1987 Telecom Australia advert.
Digital mobile systems
Technical changes were rapid and are ongoing. The following is a simplistic summary of digital mobile systems employed in Australia by the three carriers. Variations and intermediate versions existed within these systems.

2G, first  introduced in 1992, was the second-generation of cellular telephone technology and the first to use digital encryption of speech. It was the first to offer data services and SMS text messaging. Operating in the UHF 900MHz and 1800MHz bands, two versions existed in Australia:
GSM (Global System for Mobile Communications) and CDMA (Code-division multiple access).

A major difference between GSM and CDMA is that GSM was SIM specific. The mobile phone was identified in the network by its removable SIM (subscriber identification module) inserted in that phone but, in CDMA, the network identified a handset by the information stored in its internal memory, thus it was handset specific (which also implies locked to a particular carrier).

​Telstra supported both technologies from the outset and CDMA was particularly employed in rural areas. Telstra shut down CDMA in 2008 and GSM in 2016 (with the exception of the external territories of Christmas Island and Norfolk Island). The other carriers had closed their 2G GSM networks by mid - 2018.

3G networks succeeded 2G, offering faster data speeds and were the first to enable video calls. A demonstration system was installed in Adelaide in 2002 and Hutchison Telecommunications’ first commercial network in Australia was commissioned in June 2003.  3G is suitable for use in modern smart-phones, which need high-speed internet for many of their applications. Employing a system known as UMTS (Universal Mobile Telecommunications System networks) they operate in Australia in the UHF 850MHz, 900MHz and 2100MHz bands. Telstra started closing early 3G versions after 2012 and is reported that it plans to close its 3G network fully by 2024.

5G started to appear in Australia in 2019. Mostly operating in the SHF 3500MHz band, 5G has the potential to change the face of mobile communications in Australia. Claimed data speeds are prodigious compared to anything seen so far. There are technical hurdles and, as recently reported, geo-political hurdles as well.
Time will tell.​
Mobile Cells
Australian, as with most of the world's, mobile ‘phone networks are made up of many signal areas called "cells". These cells join or overlap each other to form wide coverage areas. Within each cell is a base station (and associated aerials, usually mounted on a tower) which sends and receives the mobile transmissions.

Characteristics include defined radio frequencies and frequency re-use which enable service to a large number of subscribers while reducing the number of channels required. The mobile phone automatically connects to the nearest, available base station. The base stations are connected, in turn, to dedicated digital centres where the communications are linked to the telephone or, nowadays, data networks. If a user moves between cells, the connection should transfer to the next cell without breaking transmission. 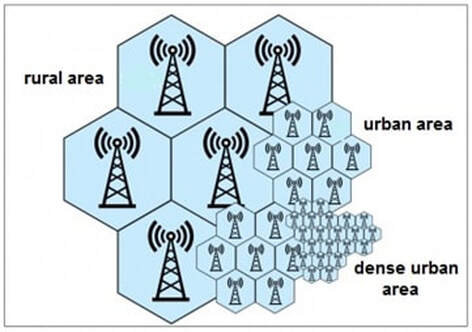 Concept of cells. Image source: https://www.tnuda.org.il/
Progression of mobile phones over the decades.

Image J. Paskulich
Telcos
PMG/Telecom Australia controlled national telecommunications until deregulation started in 1991. Australia now has three main mobile telecommunications network providers (called "carriers"). They are Telstra, Optus and Vodafone. Telstra is the largest. Each operates its own mobile network. These networks differ in coverage and accessibility, so mobile transmission performance can vary significantly in a specific location depending on the network used. The dozens of other Australian "telcos" buy capacity from these three carriers' networks.

Some information at: https://en.wikipedia.org/wiki/List_of_Australian_mobile_virtual_network_operators ​
Technology
An introduction to the history and technology of mobile phones can be viewed at:
https://www.explainthatstuff.com/cellphones.html
Another  article outlining the history and development of mobile technologies can be found at: https://en.wikipedia.org/wiki/History_of_mobile_phones
​Conclusion
At the time of writing (2020), some form of mobile telephony has existed in Australia for 70 years and automatic mobile telephony for nearly 40 years of that. In many ways, mobile telephony initially followed a parallel and, ultimately, a converging path to “landline” technology.

Both developed out of earlier communications systems. The traditional telephone’s roots are in telegraphy, mobiles in two-way radio. Manual operator systems were the initial switching methods for decades for both systems until automatic switching arrived. In more recent times, digital switching and transmission methods arose and today both technologies have merged into the global digital network.

As with many other technologies, mobile telephony started as a cumbersome, expensive and exclusive service but is now a worldwide communications phenomenon. 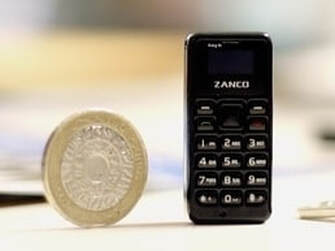