Who invented the telephone?

​Acoustic communications principles were understood by many ancient civilisations:
http://kotsanas.com/gb/exh.php?exhibit=1201003
A 1200 year old equivalent to the "tin can" acoustic telephone was found in ancient Peruvian ruins:
https://www.smithsonianmag.com/smithsonian-institution/theres-a-1200-year-old-phone-in-the-smithsonian-collections-180947641/
In more modern times, various versions of acoustic telephones and speaking tubes were developed from the 1600s through to the 1800s: https://en.wikipedia.org/wiki/Tin_can_telephone

This page only discusses electrical telephony.

The common opinion has it that the telephone was invented by Alexander Graham Bell in the USA in 1876. Bell (1847 – 1922) emigrated from Scotland to Canada and filed his patent for the telephone in the USA in early 1876 so the Scots, Canadians and Americans all claim him with great enthusiasm. I think the key passage here is “filed his patent” as there are numerous other contenders for the title of “inventor”. For example, Elisha Gray filed a patent application at the same time as Bell and controversy still exists as to how Bell's patent was upheld. Although to be fair to Bell, he defeated every legal challenge to his rights.

Another inventor was the German, Johann Phillip Reis (1834- 1874). Reis constructed his first “telephon” in 1861 and is widely recognised in Europe as the inventor of the telephone. Reis is believed to have been influenced by the French engineer Charles Bourseul (1829 - 1912) who described a telephone concept in the magazine L'Illustration in 1854. I own an antique (1868) British  "Chambers" encyclopaedia and out of curiosity looked up “telephone” with surprising results. The term "telephone" is clearly defined and Reis' work is well described. No other inventors are mentioned. 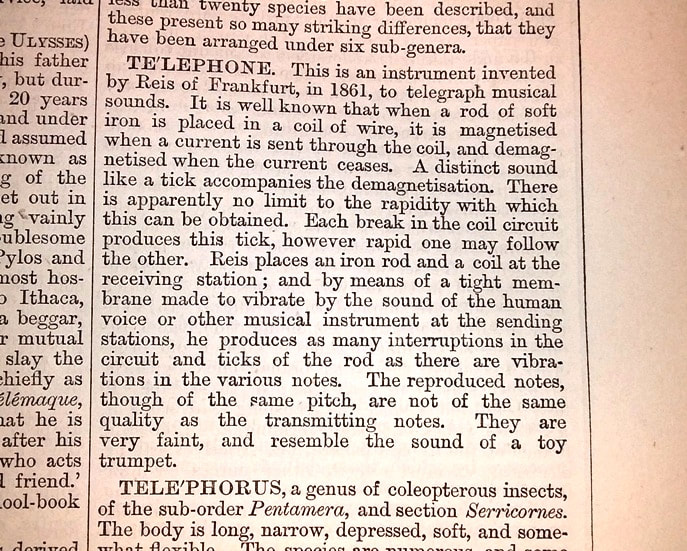 In their book of 1889, W.H. Preece and J. Maier clearly stated that Reis invented a telephone long before Bell. Given that the book was written by two highly respected scientists less than 13 years after Bell's patent, it is reasonable to believe it is an accurate, contemporary account.  Below a passage from The Telephone William Henry Preece F.R.S. and Julius Maier Ph.D London 1889 pp 96-97.
Reis' contribution is supported by another more recent source, the University of Houston's College of Engineering. Open this on-line audio file to continue:   http://www.kuhf.org/programaudio/engines/eng1098_64k.mp3
I am also interested in the work of Italian-American Antonio Meucci (1808 – 1889).

​Meucci seems to have been hard done by. It is claimed he invented a device that could transmit recognisable speech over wires in the late 1850s and he filed a patent caveat for his invention in the USA in 1871, five years before Bell! Injury, illness and resulting financial difficulties prevented Meucci from persisting with his patent and it expired in 1874.

On June 11 2002 the USA House of Representatives passed the resolution HRES 269 EH H. Res. 269. The key passages are:
“Whereas if Meucci had been able to pay the $10 fee to maintain the caveat after 1874, no patent could have been issued to Bell:……….Now, therefore, be it Resolved, that it is the sense of the House of Representatives that the life and achievements of Antonio Meucci should be recognized, and his work in the invention of the telephone should be acknowledged.”
Further reading:
http://www.telephonecollecting.org/Bobs%20phones/Pages/Essays/Meucci/Meucci.htm
http://hnn.us/article/802
http://en.wikipedia.org/wiki/Johann_Philipp_Reis
http://en.wikipedia.org/wiki/Invention_of_the_telephone
Powered by