From about 1960 there was rapid development, Australia-wide, of high capacity "long line" telephone transmission systems.  By the mid 1970s the majority of subscribers had a national dialling system (STD). The two major transmission technologies employed at the time were analogue underground coaxial cable systems and microwave radio systems.

This page describes some Western Australian systems history.
Contents
Perth - Bunbury coaxial cable
Following successful completion of the Melbourne - Sydney coaxial cable system in April 1962, installation of the Perth - Bunbury coax. cable system got underway in September 1962. It dramatically changed the face of telecommunications in SW of WA by providing many extra telephone channels and a regional television relay service to the Bunbury region.

​My former PMG colleague, Mr Alan Hampel, tells me that the system's terminals and repeaters were Siemens valve-based units employing high voltage AC power feeding. To quote Alan. "It was an unusual constant voltage system, using boost auto-transformers at each repeater, somewhat like what is done in electric railway traction, to overcome the volt drop in the coax tubes.  See diagram.​" 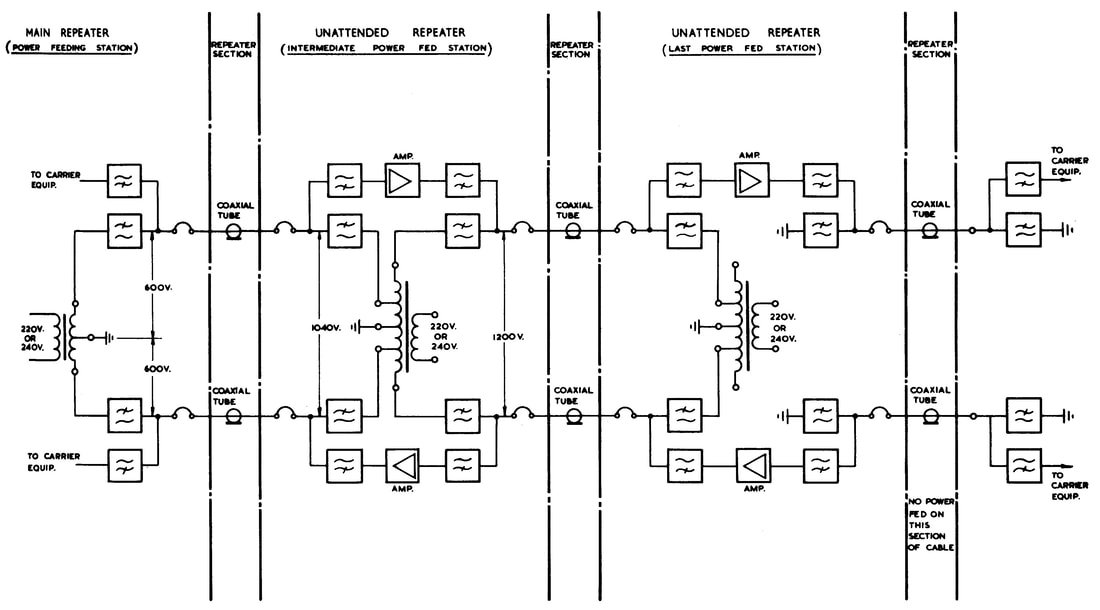 ​The system served the SW of WA for decades but by the end of the 20th century it had been abandoned. Some of the old infrastructure is  still in-situ. In August 2020 I rediscovered this surviving repeater building on Southwest Highway about 7 km north of the town of Pinjarra. The buildings were solidly built of concrete and brick and about 4 metres square. Although marred by vandals, this example was still in good structural condition.
The following information was sourced from The Telecommunication Journal Of Australia Vol. 14, No. 1 June, 1963 (P.35). To translate some of the early units of measurement (approx.): One Inch = 25.4 mm. One mile =1.61 km, c/s (cycles per second) = Hz, so 6Mc/s = 6 MHz etc.

“PERTH-BUNBURY COAXIAL CABLE
A coaxial cable is being installed between Perth and Bunbury in Western Australia to replace the existing pole route, which is incapable of catering for the additional trunk channels that are needed. A four-tube coaxial cable has been chosen in preference to radio as there are a number of relatively small intermediate exchanges that cannot economically be served by carrier channels on a broadband bearer, and which therefore require voice-frequency cable pairs. Such pairs are readily provided at the same time as the main coaxial cable, either within the sheath of the coaxial cable or in separate cables in the same trench.

The cable will carry a broadband trunk telephone system between Perth, Pinjarra and Bunbury, together with television programme transmission from the A.B.C. studios at Perth to the regional television transmitter at Mt. Lennard which will serve the Bunbury coastal area of Western Australia. (Both way television facilities could be provided in the future if required). The route distance is 118 miles and, as mentioned, voice-frequency conductors within the coaxial cable sheath will serve the trunk telephone needs of all the smaller communities along the route. In the vicinity of Armadale some 13 miles of voice-frequency trunk telephone cables will be laid concurrently with the coaxial cable to meet the heavy demands originating in the rural communities to the north and to the south of Armadale. The route has been laid out to allow Harvey to become a dropout station when telephone traffic density increases.

The cable is being laid at a depth of 4 ft. throughout the route in open trench cut by bucket wheel ditching machines. At this depth, damage to the cable by earth-moving machines, etc., is minimised. In addition, a continuous-flow gas pressure alarm system is fitted; this gives rapid warning in the event of damage to the cable sheath, and helps to keep water out in that event. Moreover, the lead sheath of the cable is isolated from ground throughout the whole distance by means of an 0.1 inch jacket of P.V.C. to protect the lead from electrolytic corrosion.

Twenty unattended repeater stations are being provided along the cable at intervals of approximately 5 1/2 miles, at which spacing the coaxial tubes will be capable of carrying a bandwidth of 6 Mc/s. Power for the intermediate repeaters is fed over the cable from Pinjarra, situated about half-way along the route. The design of the cable is such that, in future years, the number of minor repeater stations can be doubled with a corresponding increase of useful bandwidth to 12 Mc/s, which would effectively double the telephone channel capacity of the cable.

​The whole of the cable is Australian made. Outdoor installation commenced during September, 1962, and is due for completion by May, 1964. The outdoor construction is spread over two laying seasons of approximately nine months each with a planned stop-work period during the winter of 1963. By the beginning of April 1963, some 70 miles of coaxial cable and 13 miles of minor trunk cable had been laid, and the cable jointing operations were well advanced.

​The broadband telephone and television transmission terminal and repeater equipment is due for delivery late in 1963 and installation is planned for completion by October 1964. Initial telephone channel provision will meet immediate needs and the equipment has been designed to allow future channels (to a total maximum of 1,260 with the present repeater spacing) to be added as required. Facilities will be available for the provision of broadcast programme channels (10 Kc/s width) and multi-channel telegraph systems.”
Perth - Carnarvon -  Port Hedland coaxial cable
Summary of project courtesy Mr Ross Herbert. Click download file.

Download File
The above images sourced from Telecommunications Journal of Australia. With thanks to:
http://www.coxhill.com/trlhistory/history/australian_publications.htm)

Following is an extract from Telecommunications Journal of Australia Feb. 1970 describing Perth - Carnarvon section of the coax. project. The only online source with images I can find. Click download file below.

​
​​Mrs O'Donahue at Hamelin Pool saves the day
Read how the first (1964) Gemini space shot tracking project was rescued by a country postmistress and an abandoned earth return telegraph line.
​https://www.honeysucklecreek.net/other_stations/carnarvon/Hamelin_Pool_GT1.html
​Microwave radio systems in WA
GEC microwave transmission system 1962
The full text of this article appears here. Below is a brief overview of the WA installation
Perth – Northam – Albany
The equipment for this system is arranged initially to relay (a) television plus sound programme signals from Perth  to Northam (Needling Hills) and Albany (Mt Barker). The system includes nine hops with intermediate switching stations at Mt Bakewell.” 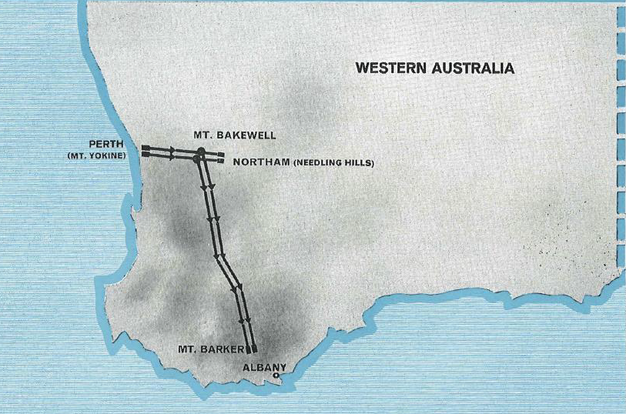 The Kimberley WA Microwave Project
Planning commence in 1978 and by 1983 the project was complete, connecting Port Hedland, Wyndham and all points between to the existing broadband network. Click on download file below to view Telecom Australia's publication describing the project (From  Peter van Vugt archives).

Download File
Australian Optical Fibre Systems Network (1985-2000)
Optical fibre (OF) transmission systems are ideally suited to digital multiplexing systems and became the norm in Australia after the 1980s. Some digital multiplexing (TDM) info. here. Basic optical fibre principles can be viewed here. A map of the extent of Australia's digital network in the 21st C. can be seen here

The image below gives a concept map of the Australian network from 1985. I had some experience in the late 1980s - early 90s with 140Mbs OF systems in WA and was across the first e-w project (565Mbs) but the memory's faded, I never kept any records and there is very little historical information on-line but  I do remember substantial OF installation projects all around metropolitan Perth at the time. If former Telecom Australia staff have any images, approximate dates or general information I'd be pleased to hear from you. Contact me here. 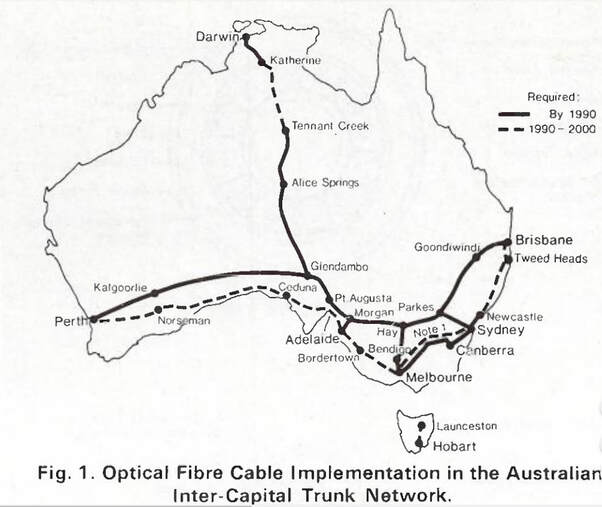