Analogue and digital telephony
​Contents
​Analogue telephony
In an analogue (also spelt analog) telephone, the user’s voice sounds are converted by the telephone's transmission circuitry into electrical signals and transmitted to line. The electrical signals’ variations in frequency and amplitude closely copy the speech signals. At the receiving end these varying electrical frequencies and amplitudes are converted back to sound signals.

Analogue telephone concept. Original image source: https://www.pinterest.ca/pin/566257353121029230/?lp=true
A delightful 1920s movie on how analogue telephones work can be seen at:
https://www.youtube.com/watch?v=YoOogesHB-Q
The irony is that it is a "silent" movie describing sound transmission!

The operation of a traditional analogue telephone is described here.
Cordless telephones
Cordless telephones consist of a handset and base station. Although modern versions have various enhancements, in general, they behave in a similar fashion to a traditional analogue "corded" telephone except the handset communicates with the base station via radio signals. The base station has two main functions; to interconnect to the telephone service and act as a (mains electricity) battery charger for the internal battery in the handset. Further information at: https://en.wikipedia.org/wiki/Cordless_telephone
PSTN
Some background information on the genesis of the public switched telephone network (PSTN) can be found here. Early telephone networks were wholly analogue. Examples include  manual exchange networks and the early PSTN, electro-mechanical, automatic exchanges. The analogue telephone signals were transmitted from the telephone and proceeded, unaltered, right through the switching equipment connections to the received end. The operation of an early “step by step” (SxS) telephone exchange showing this concept can be seen at:
https://www.youtube.com/watch?v=xZePwin92cI
An Australian SxS training video can be seen at:
https://www.youtube.com/watch?v=HcvA5q8yOTo

In Australia, "Step by step" was superseded by "Crossbar" technology (but still employing analogue, electromechanical switching devices) in the 1960s. An article on the transition to crossbar can be viewed at:
http://schoolpa.com.au/sxs/crossbar%20switching%20oct%201961.pdf

The PSTN is scheduled to be closed by 2021 - superseded by NBN/internet. After that time this information will be of historical interest only.
Community Telephone Plan for Australia 1960
This Commonwealth Gov't publication outlined the new telephone policy and described the plans for the future telephone network. The policy and plan represented a milestone in the history of Australia’s telecommunication services and a dramatic shift away from the system and methodology that had been in place for nearly five decades.
Click on download file below. ​

Download File
Transmission networks
An overview of the historical development of Australian transmission networks between about 1930 and 2000 can be seen here
Digital telephony
Digital telephony developed alongside computer systems.   In a digital telephone, the sounds are first converted by the circuitry into electrical signals, as described above, but additional stages of electronic processing are applied. The variations in the signal's frequency and amplitude are digitally encoded in the phone (codec), transmitted as strings of digital information (0s and 1s) and processed digitally through the compatible digital switching exchange. At the receive end telephone, this digital data is decoded (codec) and converted back to the varying electrical signals and then to sound signals.

Digital telephone concept Original image source.: https://www.pinterest.ca/pin/566257353121029230/?lp=true
Digital PABX networks
PABX (PBX) concepts are described here. Various digital protocols appear in different systems. The  Intel 286 microprocessor of the  early 1980s not only revolutionised personal computing but was the heart of many early digital PABXs (private automatic telephone exchanges). Typically found in business and administrative organisations, digital PABXs use digital telephones that directly encode/decode the speech signals and these signals are processed and switched digitally by the central unit. In earlier times, PABX manufacturers often employed proprietary digital encoding and their telephone instruments were incompatible with other manufacturers but now they generally follow internationally agreed digital internetworking protocols. The image below shows an early 2 Line Ericsson "Dialog 2501" digital telephone handset used on their MD110 PABX System. introduced in the late 1980s, its external appearance is similar to an analogue phone of the same era. 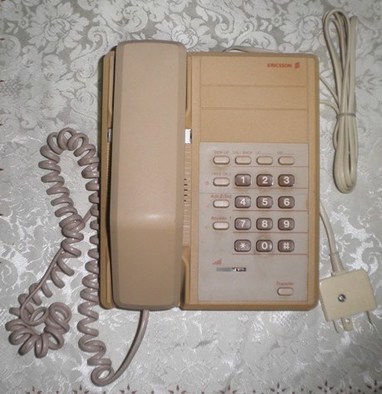 Alternatives include PABX systems with analogue telephone instruments and digital switching and “hybrid” systems which contain a mix of technologies. In recent years "hosted" or "virtual" PBX have appeared in the market. These do away with discrete equipment at the customers' premises and provide the equivalent service using public infrastructure (PSTN or the internet). An overview appears at this site:
https://www.3cx.com/pbx/what-is-a-hosted-pbx/
VoIP (voice over internetworking protocol)
VoIP is where the telephone service is again wholly digital and connections are made via the internet using internationally accepted digital protocols. “Skype” telephony is a type of VoIP. To access a VoIP line you need a compatible digital telephone instrument. Should you wish to use an analogue phone you will need to interface it with an an ATA (analogue telephone adapter). In the NBN (described below) an ATA is usually incorporated in the terminal equipment .

A simple introduction of how VoIP technology differs from the PSTN can be seen here:
https://voipstudio.com/how-is-voip-different-from-regular-telephone-service/

An unusual but informative video introducing VoIP and also the concept of ATA can be seen at:
https://www.youtube.com/watch?v=6Q_BrQpZfFE
NBN
The National Broadband Network is an integrated high speed digital data communications network that will ultimately connect all Australian premises to the internet via a mixture of transmission technologies. In addition to internet access, customers will generally have the choice of a digital VoIP telephone service transmitted over the broadband. If they wish to retain their familiar analogue telephone they may be able to choose a service connected via an analogue port provided on the NBN customer device.
Go to the NBN page for further information
Powered by