Long distance telephony developed alongside the development of the thermionic valve (AKA vacuum tube) during the first quarter of the 20th century. Valve amplifier repeaters were able to maintain satisfactory signal transmission over long distances. The first telephone conversation across the Australian continent occurred on 18 Dec. 1930 between Perth and Melbourne (source Trove NLA)


Post WW2 Australia developed rapidly, demanding a similar development in telecommunications. From around 1960 the PMG embarked on an ambitious development programme and by the mid 1970s the majority of the country had a high capacity telephone transmission network, based mainly on coaxial cable and microwave radio systems. Coincident with the development of this national network was subscriber trunk dialling. In 1961-2 the only connections available were between Canberra and Sydney and  from Warragul (Vic.) to Melbourne. By 1975 over 90% of Australian subscribers had access to STD (source: ABS Official Yearbook of Australia no. 61 1975).

Until the start of the 21st C. the major role of the various transmission systems used  in Australia was to provide multiple telephony paths. Even optical fibre based digital systems of the time were structured for telephony multiplexers. It was not until the start of the 21st C., and the rise of the internet, that their purpose shifted to providing high speed customer end-to-end digital services.
​Frequency division multiplexing (FDM)
"Multiplexing" combines and transmits a number of separate signals over one path. For example, very early 3 channel, open wire systems took three telephone circuits and, using electronic principles, altered their frequency ranges so that they each occupied their own individual frequency band above the existing voice band. In this way a maximum of four simultaneous telephone conversations could be sent over a line that previously could only transmit one conversation. This significantly improved efficiency and reduced costs.

FDM is a principle developed in the early 20th century alongside the development of vacuum tube electronics. Analogue signals, usually telephone speech circuits - "channels" (although the principle was applied to other signals such as telegraphy as well) were progressively "modulated" with  "carrier frequencies" to higher and higher frequency bands. They were combined into blocks of frequencies depending on the capacity of the transmission equipment and transmitted over a range of transmission systems including open wire pole routes, underground coaxial cables or microwave radio systems.

​The first 12 channel system in Australia was installed between Melbourne and Sydney at the end of 1938.

Analogue transmission systems in Australia were gone by the turn of the 21st century. This website gives an idea of the FDM process. Australia used the CCITT scheme.
https://en.wikibooks.org/wiki/Communication_Systems/Frequency-Division_Multiplexing
Coaxial cable
Further information on the operation of coaxial cable broadband systems installed in WA can be seen here

A coax. cable "pair" consists of two electrical conductors arranged such that one wire is located inside another which is in the form of a tube. The conductors are separated by suitable insulation. Although now mostly obsolete in underground telecommunications cabling systems, the coax. principle is still used extensively in "internal" high speed/high frequency transmission equipment cables. The layout of the conductors naturally shields its  signals from external electromagnetic radiation and similarly minimises radiation of the transmitted signals. This results in good signal to noise ratios, relatively low loss and enables wide-band frequency transmission. Modern "internal" coaxial cables use solid polyethylene (or similar) insulation but the underground cable tubes were "air cored" employing insulating spacers rather than solid core. This improved their transmission properties.

The typical coax cable used in the PMG systems of the 1960-70s comprised a lead sheath, several pairs of coax tubes plus additional bundles of traditional "interstitial" cable pairs in between the tubes. The interstice pairs provided control and local telephone circuits and the coax tubes provided high frequency transmission paths for FDM telephony and television. Telephony required two tubes per system (both-way transmission). Unidirectional TV only required one tube but the second was usually kept as standby.
The following image of a piece of coax from that time was taken from Colin McDiarmid's Flickr post which can be viewed at:
https://www.flickr.com/photos/151495594@N04/albums/72157680514592172/page6 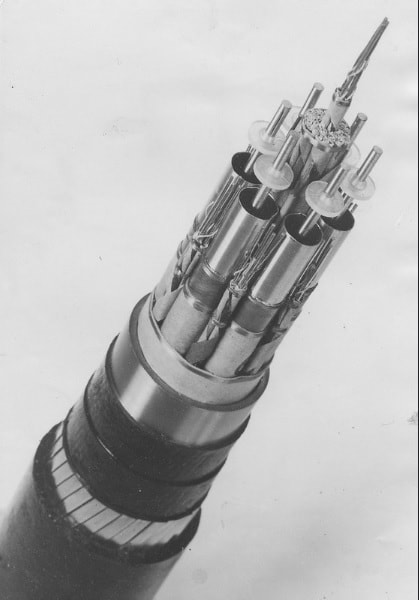 Piece of coaxial cable showing coaxial tubes and bundles of interstice pairs. Image source: Colin McDiarmid.
Melbourne-Sydney Coaxial Cable Project
A series of detailed articles and images on the first Melbourne - Sydney coaxial cable project in the early 1960s can be found in The TELECOMMUNICATION JOURNAL of Australia VOL. 13, No. 3 FEBRUARY, 1962 -Special issue Sydney-Melbourne Coaxial cable project here
​Microwave radio systems network
Coincident with the development and installation of coaxial cable networks in Australia in the 1960s-70s were the microwave radio systems  installed for the expanding PMG (analogue) broadband  network. The original systems in WA were provided by GEC UK. I believe later updates were sourced from NEC Japan. The following information was derived from various publicity releases from GEC at the time.  My thanks to Mr A. Hampel for providing the source material.
​GEC microwave transmission systems in Australia 1962
The following text and images are derived from an advertisement placed by GEC (UK) in the “Post Office Electrical Engineer’s Journal” (the British equivalent of our Telecom Journal of Australia) October 1962. It gives a general outline of existing and proposed microwave radio systems in Australia at the time.

“The GEC is to supply microwave equipment to the APO for four new SHF radio-relay systems. The equipment is suitable for the transmission of either television and its associated sound programme signals or 960 telephone circuits. Each system can be easily extended to provide one standby radio channel for a group of up to three working radio channels for any one direction of transmission.

The four new systems are as follows:
Adelaide – Mt  Gambier – Melbourne
The equipment for this system is arranged initially to relay (a) television plus sound programme signals from Adelaide (Mt Bonython) to Mt Gambier (Mt Burr) and (b) telephone circuits between Adelaide and Melbourne (Box Hill). The system includes seventeen hops with intermediate switching stations at Bordertown and Ararat.

Balaklava – Broken Hill
The equipment for this system is arranged initially to relay (a) television plus sound programme signals from Balaklave to Broken Hill. The system includes seven hops.

Bendigo – Swan Hill – Mildura
The equipment for this system is arranged initially to relay (a) television plus sound programme signals from Bendigo  to Swan Hill (Goschen) and Mildura (Yatpool). The system includes ten hops with an intermediate switching station at Swan Hill.

Perth – Northam – Albany
The equipment for this system is arranged initially to relay (a) television plus sound programme signals from Perth  to Northam (Needling Hills) and Albany (Mt Barker). The system includes nine hops with intermediate switching stations at Mt Bakewell.”
​The east-west network
​The east-west system opened in July 1970. A detailed group of articles about this system can be read in the Telecommunications Journal of Australia February 1971 (Vol 21 No. 1) available at:   http://www.coxhill.com/trlhistory/history/australian_publications.htm 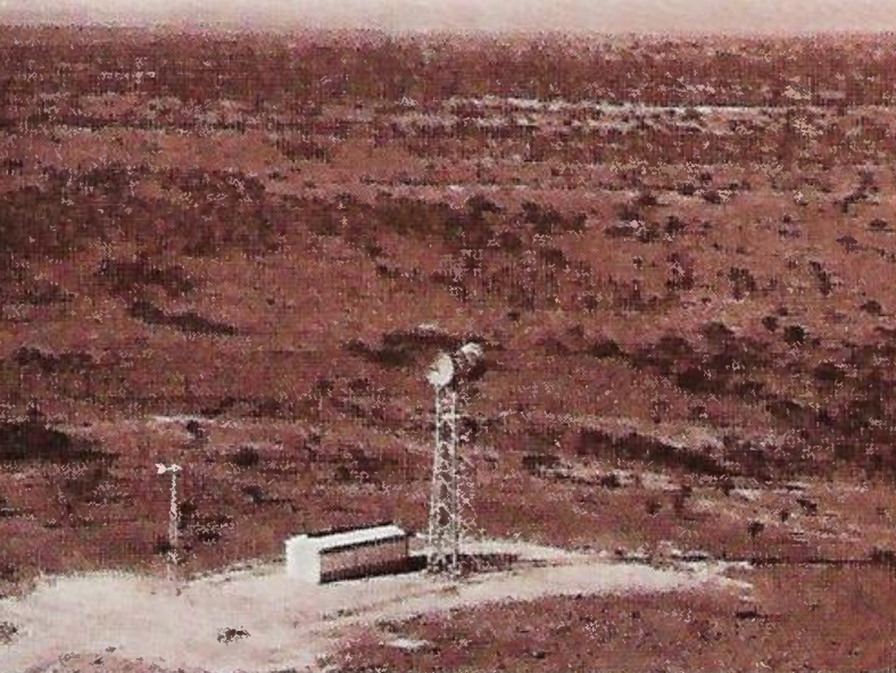 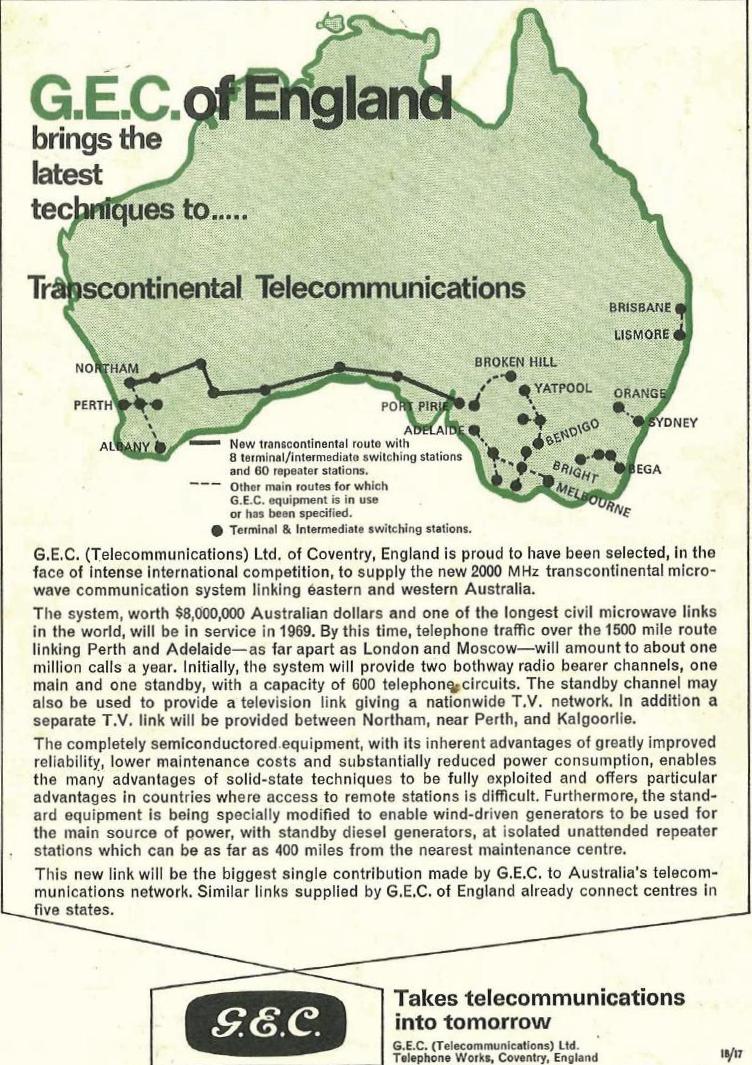 Source: Advert. UK Post Office Telecommunications Journal Autumn 1967
The Australian Transmission Network 1974
The "National Broadband Network" was a 1970s Telecom Australia description of the analogue  "trunk" transmission systems network that covered Australia. The term has been appropriated in recent years to mean the digital customer access network - NBN.
​
I found the following diagram showing the national network in a 1975 Telecom Australia publicity brochure. ​
To put it into context, Australia has an area of 7 689 000 square km, a coastline of approx. 20 000 km, is approx. 4000 km est to west and 3200 km north to south. In 1975 the Australian population was a little under 14 million. Today (2021) the network is wholly digital transmission systems and the population is around 26 million. 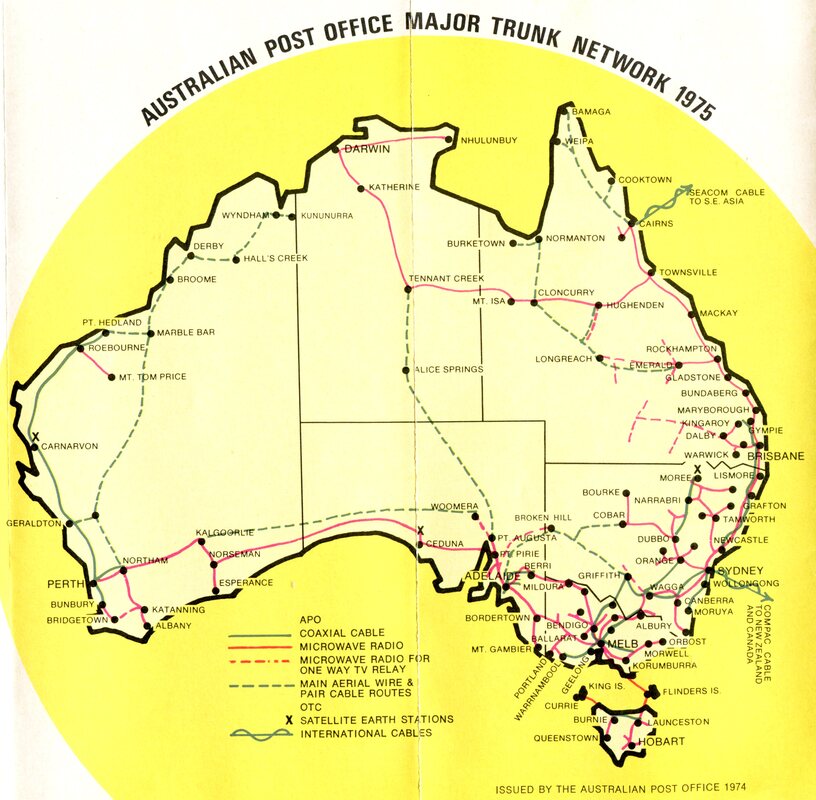 ​Time division multiplexing
From about 1980 there was a shift towards digital multiplexing technology and digital transmission systems (e.g. optical fibre) in Australia.

Time division multiplexing TDM is a means of  combining many low-speed digital signals into a single high-speed pulse train. A detailed article on TDM principles can be viewed at the "ScienceDirect" site here. It mainly refers to the USA 24 channel version but principles are the same as the Australian 30 channel systems.

In Australian and European telephony, the basic building block was the 30 channel PCM multiplexer. 30 analogue telephone channels (as above 0-4 kHz) were first converted to digital signals ( 0s and 1s) using pulse code modulation (PCM).  A detailed article on PCM concepts can be seen at the "ElProCus" site here.

These PCM encoded channels are then "stacked" in time slots by time division multiplexing (TDM) into a nominal 2Mb/s data stream. These 2Mb/s streams, in turn, could be combined in higher order multiplexers to suit the capacity of the transmission medium e.g. optical fibre systems.

Some background on contemporary (plesiochronous) digital multiplexing (PDH) concepts is provided by "Carritech Telecommunications" and can be viewed here. Since the 1990s, PDH has been superseded by the synchronous digital hierarchy (SDH). SDH is beyond the scope of this discussion but a definition and brief overview by "NFON"appears here.
Australian Optical Fibre Network 1985 - 2000
Optical fibre transmission systems are ideally suited to digital multiplexing systems and became the norm in Australia after the 1980s. Basic optical fibre principles can be viewed here.

The image below gives a concept map of the Australian network from 1985. I had some experience in the late 1980s - early 90s with 140Mbs OF systems in WA and was across the first e-w project (565Mbs) but the memory's faded, I never kept any records and there is very little historical information on-line.  If former Telecom Australia staff have any images, approximate dates or general information I'd be pleased to hear from you. Contact me here. 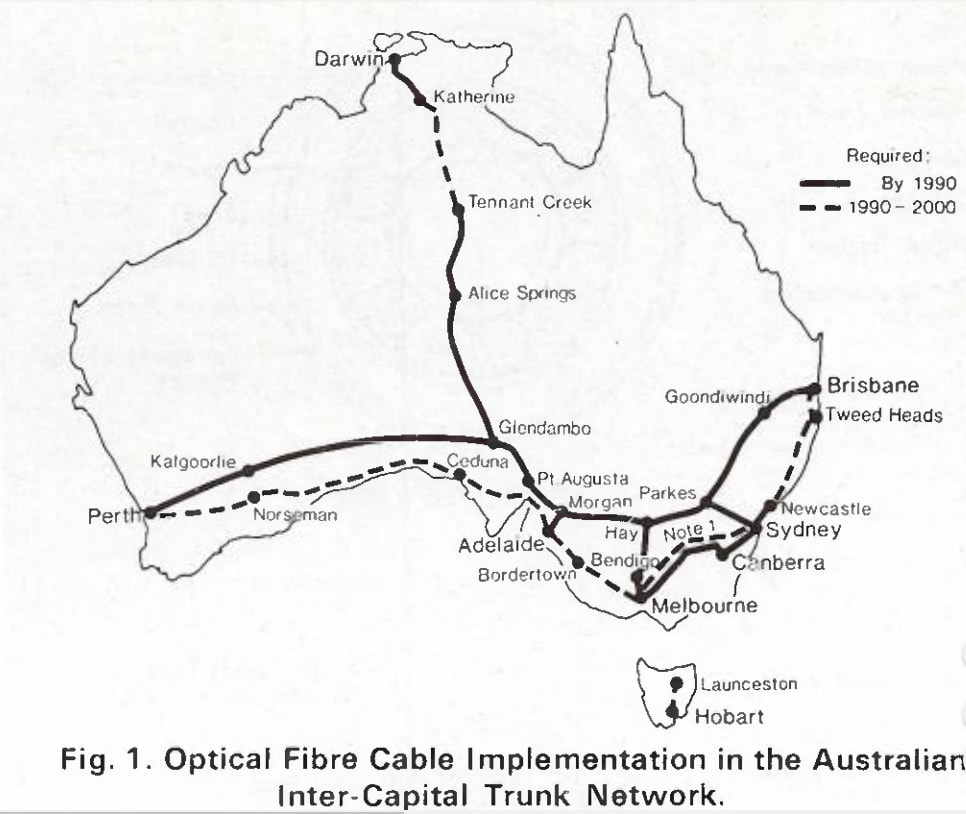 Image source: Cable Design and Installation Technique for Direct Buried Non-Metallic Optical Cables. B. T. deBoer, R. W. A. Ayre, R. B. Schuster. Telecommunications Journal of Australia Volume 35 No. 3 1985.
NBN (Digital National Broadband Network) 2009 -
No discussion on the history of Australian telecommunications transmission systems would be complete without mentioning the National Broadband Network (NBN). Implemented by the Kevin Rudd Labor Government a couple of years after its election in 2007, the NBN was to connect the majority of Australian premises directly to an integrated digital communications system over a high speed optical fibre network.  It was a heroic project predicted to cost many tens of billions of dollars and take a couple of decades to complete. The (Liberal) conservative government (2013 -), initially led by Tony Abbott, has reviewed this project and looked at ways to reduce the costs,  so the performance outcomes may not be as originally expected. Whatever happens, the NBN has ultimately spelt the end of the public switched telephone network and analogue telecommunications. More information on analogue and digital telephony can be found here and on the NBN here.
​
The following NBN network map is not up-to-date but it shows an overview of the major telecommunications transmission paths in the second decade of the 2000s. The network has been upgraded wholly to digital transmission systems (mostly optical fibre) but its extent closely follows that installed  40 years prior. A 2016 map of WA showing all major infrastructure systems, including Telstra's intrastate optic fibre network (yellow), can be viewed here 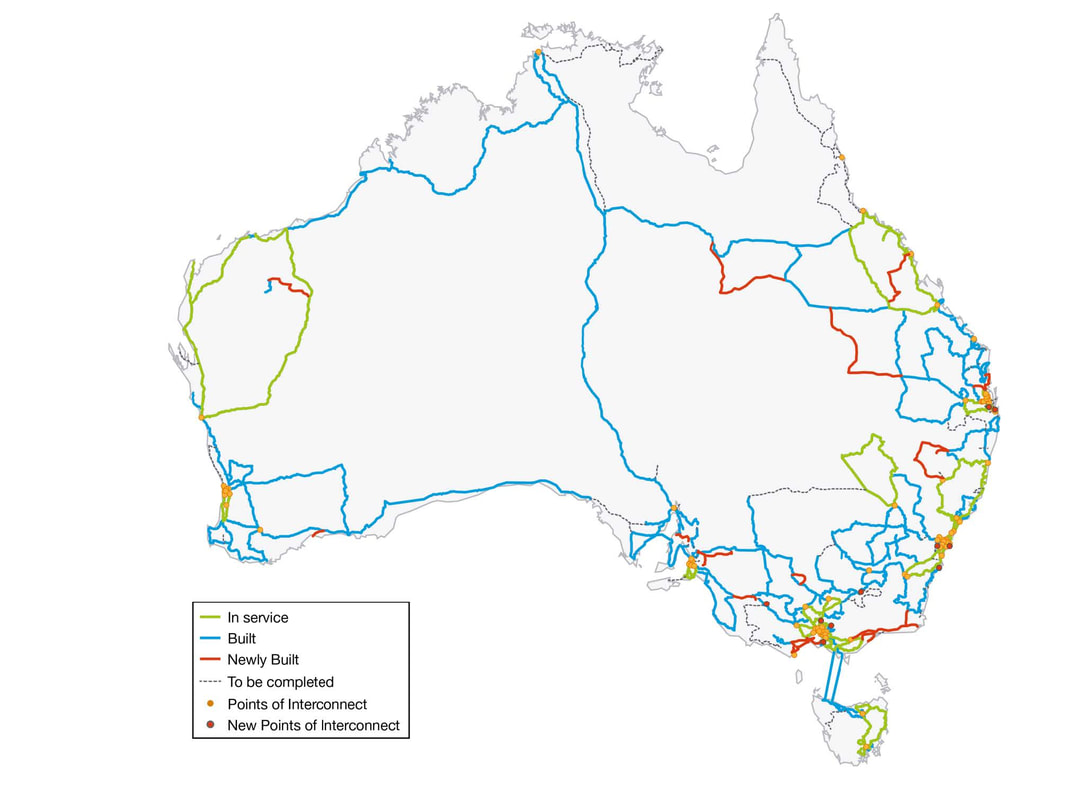